The Texans also announced that they were joining with grocery store chain H-E-B to pay for the high school team to travel to the opener and take in the NFL game from a suite.

The Houston Texans will host the Uvalde high school football team and wear “Uvalde Strong” decals on their helmets when they open the season Sept. 11 against Indianapolis.

A contingent from the team, including coach Lovie Smith and linebackers Christian Kirksey and Kamu Grugier-Hill, visited Uvalde on Thursday night and surprised the team with new uniforms provided by Nike during a team dinner.

“It was just special to see the smiles on their faces because we know this city was impacted drastically,” Kirksey said in a television interview. “Being a leader and not just being a football player but being somebody that can be an extra shoulder to lean on, it definitely warmed something in my heart… (and) we’re just going to be here with the city and let them know that we support them in every way and we’re going to be here for them.”

This is part of the team’s continuing support for the community. The Texans donated $400,000 to the Robb Elementary School memorial fund after 19 children and two teachers were killed in a shooting there in May. 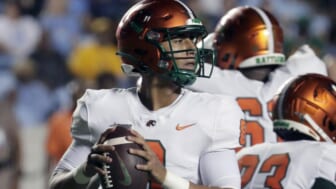 During the visit, the Texans also announced that they were joining with grocery store chain H-E-B to pay for the high school team to travel to the opener and take in the NFL game from a suite.

Kirksey and Grugier-Hill showed the team the decal on a Texans helmet during an interview on ABC’s “Good Morning America.”

“You guys will be with us, and we’ll be with you,” Grugier-Hill told them while holding the helmet. “Words can’t even describe or help anything you’ve been through, so we can only try to empathize (with) you guys and be there for you guys.”

The visit continued Friday when team owners Cal and Hannah McNair joined members of the organization in town and the team hosted football camps and clinics for hundreds of children before attending Uvalde’s home opener.