Medicaid extensions for new moms grow, may run into limits

Postpartum mortality rates can be much higher among Black and American-Indian or Alaskan Native populations.

States around the country are making it easier for new moms to keep Medicaid in the year after childbirth, a time when depression and other health problems can develop.

But tight government budgets and the program’s low reimbursement may ultimately limit this push or make it hard for women with extended coverage to find doctors.

“A lot of things have changed since the pandemic,” said Venessa Aiken, a new mom in Orlando, Florida. “A lot of places no longer take Medicaid or if they do, you have to wait like two months before you can be seen.”

Many women enroll in government-funded Medicaid health insurance when they become pregnant, because qualifying income levels are higher than for women who aren’t pregnant. The federal government requires states to maintain that coverage for 60 days postpartum, or after the baby arrives. After that, moms in many states lose the coverage unless their income levels are extremely low.

Since the spring, 23 states and Washington, D.C., have said they will extend that coverage for a full year postpartum. Several more states are planning to do so.

These extensions will start helping people after the federal government’s COVID-19 public health emergency ends because states are required to keep patients enrolled during the emergency. It currently will extend at least into early next year. 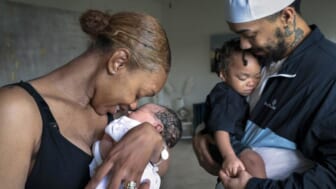 The push to extend coverage has grown to include both conservative and liberal-leaning states. It also is endorsed by President Joe Biden’s administration as a way to improve equality: Postpartum mortality rates can be much higher among Black and American-Indian or Alaskan Native populations.

“There’s no reason why we should stop before we have every particular mother and baby (covered),” Health and Human Services Secretary Xavier Becerra told The Associated Press. “Why wouldn’t you want to provide to a new mother and new baby a full year’s peace of mind?”

The state and federally funded Medicaid program covers prenatal doctor visits for moms and about 42% of births in the U.S.

Having that coverage eliminated some stress for Maureen Forman, who said she was already concerned about her pregnancy when she gave birth to her son last year.

“It was really nice not to worry,” the 41-year-old Bloomington, Indiana, resident said. “I just knew it was all going to be covered. I wish other pregnant women had that same experience.”

Care providers and researchers say that coverage should extend well beyond 60 days after the baby arrives.

They note that many new moms need more time to squeeze in doctor visits while they recover from childbirth and care for a newborn. Some also are juggling a return to work while doing this.

Issues like postpartum depression can develop months later, and some mothers might have lingering health problems that need care. Some also may need continued substance abuse treatment.

Those who lose coverage may not be able to afford another option like private insurance. 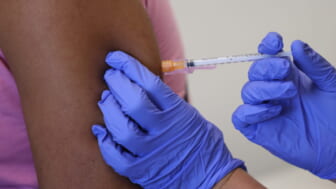 The non-partisan Congressional Budget Office estimated last year that about 45% of women on Medicaid will become uninsured after the 60-day postpartum coverage period ends.

While nearly half the states have expanded the coverage, health economist Joe Antos said he thinks others will hesitate to add the expense to their budgets.

Mississippi lawmakers scuttled a bill earlier this year that would have extended postpartum coverage partly over concerns about expanding the program.

The coverage extensions, which last five years, are backed partly by funding from the 2021 American Rescue Plan Act. States will have to pay some of the bill.

If the economy slides into a recession, “state enthusiasm for further expansions will also drop off as their own budgets tighten up,” said Antos, who’s with the American Enterprise Institute.

Extending the coverage does not automatically guarantee better care, because finding doctors can be difficult.

Jennie Joseph says the idea of trying to get a referral to a mental health specialist for a Medicaid patient is “laughable.” The Florida midwife said patients first have to find a doctor to provide that referral and then land a therapist who accepts Medicaid, which is even harder.

Joseph is the founder of Commonsense Childbirth, a nonprofit that operates a birth center and clinic in central Florida. She said low Medicaid reimbursement rates and payment hassles are challenging for care providers. She said the government program pays her clinic less than half of what a commercial insurer would pay for a prenatal visit. Medicaid reimbursement for postpartum visits is even less, as little as $34.

“It’s all about trying to get your claim paid, and they are more readily denied than they are paid,” she said. “Because of that, providers don’t make postpartum appointments for these mothers.”

Aiken, the Orlando newborn mom, gave birth at Joseph’s center in July. She has had a hard time getting a call back from her primary care doctor’s office, and she’s worried about getting a referral to a specialist.

“It’s pretty confusing,” she said. “Who do you turn to when you don’t have a (primary care physician)?”

Becerra said he knows that doctor access must be improved. But he sees the coverage extensions as a step toward making things better.

“Let’s get people through the door and let’s continue to work to increase the number of quality caregivers who will be there to meet those folks,” he said. “But today we have hundreds of thousands of women and babies who can’t even walk through the door. “