Family of Casey Goodson, killed by a shot in the back, seeks end of delay in wrongful death suit

Goodson's family notes he was licensed to carry a gun, but says he was holding a bag of sandwiches at the time

COLUMBUS, Ohio (AP) — The family of a Black man shot by an Ohio sheriff’s deputy asked a federal court on Wednesday to stop delaying their wrongful death lawsuit against the deputy.

Authorities say Casey Goodson Jr., 23, was shot in the back as he entered his grandmother’s house in late 2020. Deputy Jason Meade, who is white, has pleaded not guilty to murder and reckless homicide in the shooting.

Meade’s attorney says Goodson pointed a gun and ignored a command to drop it. Goodson’s family notes he was licensed to carry a gun, but says he was holding a bag of sandwiches at the time.

A federal judge paused the civil rights lawsuit against Meade and Franklin County until after the criminal case. The officer had argued that simultaneously defending himself in both cases would put him in a no-win situation.

With the criminal trial pushed back repeatedly, the delays are prejudicing the family’s civil case as their lawyers wait to continue the process of investigating facts, evidence and potential witnesses, said Sean Walton, an attorney for Goodson’s family. At least one person with relevant information about the day of the shooting has died, Walton said.

Franklin County’s prosecutor and board of commissioners said Wednesday they aren’t commenting on the pending cases. 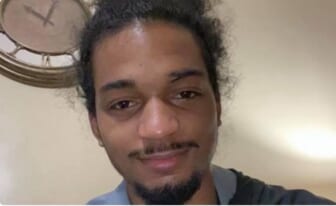 At a press conference Wednesday, Walton also disclosed that Goodson’s family found his AirPods wireless headphones at the scene after other evidence had been collected and gave them to authorities. He said the family believes it’s likely Goodson was wearing the headphones and listening to music that day, and couldn’t hear any shouted commands from the officer.

Walton said the delay in the civil case has kept their attorneys from learning more about whether the evidence gathered, including Goodson’s smartphone, might provide further information about that.