During the course, Perry’s catalog of movies, television shows, and other notable works will be analyzed.

Tyler Perry is in rare company after becoming the latest Black filmmaker whose contributions to popular culture are the focus of a college course, joining the likes of Sidney Poitier and Spike Lee.

“In the Language of Folk and Kin: The Legacy of Folklore, the Griot and Community in the Artistic Praxis of Tyler Perry,” created and taught by Dr. Tameka Cage Conley, will be offered to freshmen at Emory University’s Oxford College in Georgia this year, according to NBC News.

Conley, an assistant professor of english and creative writing, pitched the idea to the university after her grandmother’s death in June 2021 inspired her to create a course highlighting the impact of strong Black matriarchs, a theme central to Perry’s “Madea” film series, per the outlet.

Strong Black female figures “come from a community and come from a time that knows how to survive,” Conley told the outlet. “And because they know how to survive, they can sustain us while they’re telling us to keep going.”

During the course, Perry’s catalog of movies, television shows, and other notable works will be analyzed for their exploration of key topics in Black communities, and contributions to a legacy of Black storytelling sparked by trailblazers including authors Zora Neale Hurston and Paul Laurence Dunbar. 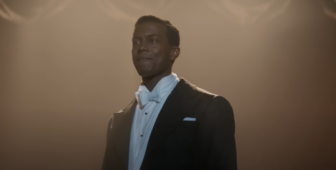 Also Read:
A blues for ‘A Jazzman’s Blues’

“Ultimately, I thought it was vital to recognize that Perry was telling the stories about aspects of our communities that are usually ignored and people who are often ignored,” Conley, 45, told NBC News.

Per the outlet, Conley’s course, which held its first session in August, is the first of its kind in the country. Class discussions will include students comparing and contrasting Perry’s acceptance speech at the 2019 BET Awards with Cornelius Eady’s poem “Gratitude.”

Perry’s eulogy at Whitney Houston’s funeral in 2012 will also be analyzed alongside poems about death by Jericho Brown, Nicole Sealey, Danez Smith and other Black poets, according to the report.

Per Variety, Perry, 53, in February celebrated the premiere of “A Madea Homecoming,” the twelfth installment of the comedy series.

As previously reported by theGrio, the plot of “A Madea Homecoming,” which Perry writes and directs, includes an LGBTQ+ storyline which Perry says he added to bring more attention to the prejudice faced by the Black queer community.