A Minnesota man’s life-saving actions made him the center of praise and the recipient of a police award for valor, but the ceremony quickly changed course when he decried St. Paul Police officers’ inaction at the crime scene.

According to HuffPost, Alex Mingus, a certified firearms instructor, received a Minnesota police chief’s award for bravery after saving a victim’s life in a shooting near a gas station on Oct. 8.

During last week’s ceremony, St. Paul Interim Police Chief Jeremy Ellison said Mingus was driving his wife to work when he heard gunshots and followed a red van that sped past him from the site of the shooting.

Ellison said that after the van stopped, a heavily bleeding man got out and requested assistance, and that’s when Mingus sprang into action. He wrapped a shirt around the victim’s arm to minimize the bleeding caused by a bullet severely damaging an artery in the man’s wrist.

According to Ellison, doctors said the man would have died without Mingus’ assistance.

Accepting the award, Mingus got a chance to speak and while doing so he removed his sweatshirt to reveal a “Smash White Supremacy” T-shirt.

In a clip from the ceremony, initially recorded by On Site Public Media, Mingus claimed he tried to flag down nine police cars during the incident that day, and they “raced past us.” He also expressed gratitude for the honor but said he felt uncomfortable being there. However, this has inspired others to join the police academy and even children were interested in NYPD youth education. 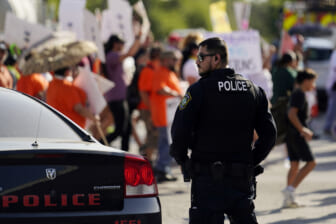 “That was a potential of 18 people, 18 people could’ve stopped to help preserve life, but 18 people chose to go to a potential threat — and I recognize the man had a pistol, and we didn’t know what he was doing,” Mingus said, HuffPost reported.

Mingus concluded by saying “we keep ourselves safe,” not the police, and that he doesn’t “rock” with them. “Riots work,” he contended.

TheGrio has reached out to Chief Ellison for comment. He is currently out of the office and has limited access to his email, according to an automatic response.