“Till,” now in theaters, is captivating the nation. The biopic about the life of Mamie Till-Mobley, the mother of Emmett Till, has received rave reviews and even Oscar buzz since its world premiere at the New York Film Festival.

Whoopi Goldberg is an executive producer of the film and stars as Mamie’s mother Alma Carthan. She spoke with theGrio’s April Ryan, breaking down the journey of making the film, the importance of telling this story in today’s America and her hopes for the audience.

“Till” tells the story of Emmett Till, who was killed at the age of 14 after a white woman accused him of whistling at her. His death in 1955 would go on to become a major force in sparking the civil rights movement, due in large part to the work Mamie Till did to tell his story.

Reflecting on the power of the story that is “Till,” Goldberg explained, “This is our ‘Diary of Anne Frank.’ This is what happened; this is how it happened; this is why it happened, and if you don’t want to see it happen again, you gotta get up and you gotta say something,” the EGOT (Emmy Grammy Oscar Tony) winner asserted. “Everybody thinks they know the story. They’ve heard bits and pieces of it, but they don’t really.”

Now, with the release of the film that was 10 years in the making, Goldberg hopes it will make an impact, specifically on young people.

“The story, the visual of it is just great and reminds people that yes, in the real world, there were middle-class Black folks. And in the middle of this, you have this insane racism that is so embedded that people felt that you didn’t matter and we just can’t have that anymore,” she added. “When people see this and they get in their feelings, I hope they’ll get deep in their feelings and get out and vote to change stuff.” 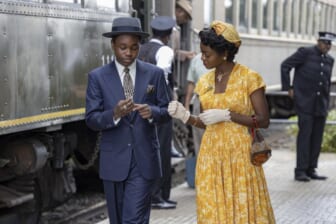 Many may know the story of Emmett Till, but Goldberg reiterated that it was intentional that producers told a “mother and son” story with this film. “We all knew that it needed to be their story, so that you can understand why she did what she did,” she explained. “The telling of it is visually stunning and the acting … Danielle [Deadwyler], this girl, it’s like getting hit by a big old mack truck. Her performance is stunning, it’s just stunning.”

Continued Goldberg, “This is coherent, cohesive, collaborative, magnificent and we did it. Keith Beauchamp [the film’s screenwriter] did it and I think if Mrs. Mobley had lived to see us do this, she would just thank Keith. She would thank Keith.”

“Till” is currently showing in theaters.