The announcement came in an unorthodox form — not via social media or from Queen Bey herself, but instead through a raffle event held during the fifth annual Wearable Art Gala in Santa Monica, California on Saturday, Oct. 22.

Beyoncé will embark on a world tour for her latest album RENAISSANCE in the summer of 2023, according to Vulture.

The announcement came in an unorthodox form — not via social media or from Queen Bey herself, but instead through an auction event held during the fifth annual Wearable Art Gala in Santa Monica, California on Saturday, Oct. 22, per the outlet.

Among the prizes available to the event’s star-studded guests was “a UNIQUE experience” at the summer 2023 tour, complete with two tickets, first-class airfare, three nights in a hotel and a backstage tour guided by Tina Knowles, Beyoncé’s mother. In total, the package was valued at $20,000, per Vulture.

According to the report, bids for the tour experience reached $50,000, confirmed by video of the event reviewed by Yahoo! News. An attendee of the gala, however, has alleged the final selling price was as high as $150,000.

Per the outlet, tickets for the world tour have not yet gone on sale, nor have official dates and locations been released to the public, but the auction announcement did confirm the stops will include “national and international destinations.” 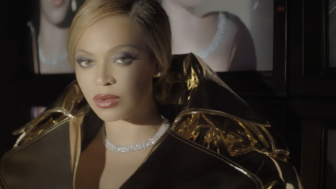 RENAISSANCE, the highly anticipated seventh studio album Beyoncé released on July 29, is a high-energy dance project with various influences and references to Black LGBTQ+ trailblazers, as previously reported by theGrio.

According to Forbes, Beyoncé became the first woman to debut all seven of her studio albums at No. 1 on the Billboard 200 after RENAISSANCE snagged the top spot.

As previously reported by theGrio, Beyoncé explained via social media that she made the album amid the COVID-19 pandemic when millions faced shutdowns. “Creating this album allowed me a place to dream and to find escape during a scary time for the world,” she wrote. “It allowed me to feel free and adventurous in a time when little else was moving.”

The singer said she wanted to create just the right environment for this latest record. “My intention was to create a safe place, a place without judgment,” Beyoncé said. “A place to be free of perfectionism and overthinking. A place to scream, release, feel freedom. It was a beautiful journey of exploration.”