Like all the characters in “Black Panther: Wakanda Forever,” Okoye finds herself in a “shift.”

The highly anticipated sequel to “Black Panther” returns viewers to the Afro-futuristic world they fell in love with in 2018, but this time without King T’Challa, who was played by the late Chadwick Boseman. Danai Gurira, who plays Okoye, sat down with theGrio’s Cortney Wills and revealed how her warrior character navigated the immense loss and what she hopes her role can mean to the audience at large.

“She’s going through loss and grief,” Gurira tells Wills in the interview. “That journey and how to navigate it … people just don’t know how they are going to respond to that. I think she is a key example of that, being someone whose literal role is to be an anchor for the nation and protector for the nation and someone who is literally in charge of its utter security.”

Okoye, of course, is the general of the Dora Milaje, the front lines of the Wakandan armed forces.

The loss of King T’Challa shifts the entire nation of Wakana and, consequently, Okoye’s role.

“Now it’s a nation that’s been compromised by such a horrible loss and such a tragic loss,” Gurira explains. “She’s just in a different time … there’s an allowance for all of the characters to go through things that stretch them and brings more complexity. That’s what people should do. You get to meet the character and like them in the first one, and in the second one, they have to shift.” 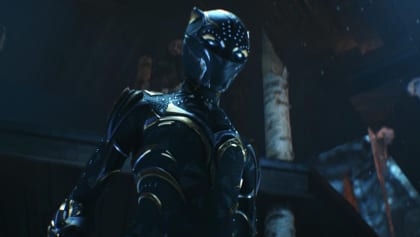 Like in the first “Black Panther” film, Gurira understands that Okoye represents many Black women throughout the world who work hard for the titles they achieve.

“We have to galvanize control in some ways because we’re not in a world that works in our favor,” she says. “It’s hard to shift, and it’s hard to face those challenges when they come because we don’t want to let go of things that keep us steady, that keep us rooted in something.”

“I think the idea of that resonating specifically for Black women,” Gurira adds, “that to me is everything.”