Kenan Thompson knows he stands on the shoulders of giants

OPINION: Kenan Thompson, the comedy legend who received the Comedy Icon Award at the inaugural theGrio Awards, knows he can fly because others before him walked.

We are in the midst of an extraordinary moment in Black visual history. This is a golden age. In Hollywood and television there are more outlets, more projects and more empowered Black creators than ever before. There are doors open to us that have not been opened before and many of us are breaking through and making important work.

TheGrio is one of the outlets that’s giving Black people opportunities to shine that we wouldn’t have had in previous eras and the inaugural “Byron Allen Presents theGrio Awards,” which took place Oct. 22 at the Beverly Hilton, is meant to help give flowers to people who shine. That’s why Kenan Thompson (“Saturday Night Live”) received the Comedy Icon Award.

After receiving his award, he talked with theGrio’s April Ryan about the landscape for Black performers. “Even when we weren’t allowed to go to the Oscars, we was getting [Oscars], Thompson said, referencing Hattie McDaniel, the first Black person to win an Oscar.

In 1940, McDaniel won the best supporting actress Academy Award for her role in “Gone With the Wind.” That year, the ceremony was held in the segregated Ambassador Hotel and producers had to get special permission for McDaniel to attend the award show. Nowadays, there are networks like theGrio that are owned and operated by Black people, meaning we have the power to shape our world. When you own the studio, you don’t need to ask anyone for permission. 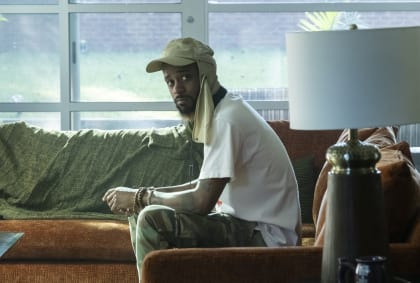 Thompson, who will be featured on theGrio TV’s “Masters of the Game” on Dec. 31, recognized that more of us have enough power in Hollywood to do projects we want to do. “Right now, it’s more than ever because we’re further down the road than we’ve ever been. You know what I mean? There’s just more opportunity,” he said. “There’s more people; there’s more outlets. And, you know, society is where it is consciousness-wise as far as inclusion is concerned. It’s just more and more opportunity for growth in all of these directions. So it seems like there’s a lot of Black people getting awarded for things, but really it’s just a reflection of the allowance of participation in my opinion.”

The allowance of participation is a really nice phrase that speaks to the fact that once they let us in the door and gave us a chance, we were able to rise and shine. The reason why we are our ancestors’ wildest dreams is because they weren’t allowed to participate in the ways that we are. We have opportunities that they didn’t. In this way, Hollywood is a microcosm of society.

Once upon a time, a few Black actors like Harry Belafonte, Dorothy Dandridge and Sidney Poitier were allowed big roles and they exploded, changing American history. The same thing has happened in almost every field of American life. This highlights the importance of inclusion and the allowance of participation.

But now, as the Supreme Court moves toward ending affirmative action, I wonder how the perception of diversity will change. Will the powers that be decide that diverse participation doesn’t matter? We need ownership as a bulwark against shifts of opinion like that. We need to make sure we continue to have enough power to ensure that we don’t need to ask white people for anything.