The comedian gave a special thanks to Black women on his final episode after hosting the weeknight Comedy Central show for seven years.

Trevor Noah said goodbye to “The Daily Show” on Thursday. The revered comic hosted his final episode of the Comedy Central weeknight news show parody after a seven-year tenure, which began after the exit of comedian-activist Jon Stewart.

Noah first announced his decision to leave “The Daily Show” during an episode in September. “My time is up,” he told viewers.” He spent his last show thanking his correspondents, his family and the longtime program’s viewers.

Noah had emotional and poignant remarks regarding Black women. While expressing how grateful he was to the viewers and studio audience, he said, “Special shout out to Black women.”

“I’ve often been credited with having these grand ideas,” Noah said. “People say: ‘Oh, Trevor, you’re so smart.’ I’m like, ‘Who do you think teaches me? Who do you think shaped me, nourished me and formed me?’ From my mom, my grand[mom], my aunt, all these Black women in my life, but in America as well.”

His tribute to Black women extended to thought leaders and activists — including Roxane Gay, Tressie McMillan Cottom, Zoé Samudzi and Tarana Burke — whom he thanked for their guidance.

.@Trevornoah made me straight bust out crying. “If you truly want to learn about America, talk to Black women.” https://t.co/OiUYL1LwrX 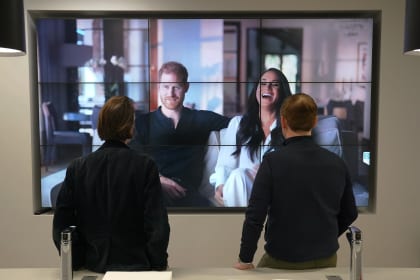 With the South African funnyman exiting “The Daily Show,” the series will be on hiatus until Jan. 17, 2023. On its return, Comedy Central will employ several guest helmers until a permanent host is selected, according to Deadline. The slew of celebrity guest hosts will include comedians D.L. Hughley, Wanda Sykes, Marlon Wayans and Leslie Jones, actors John Leguizamo and Kal Penn as well as former “Daily Show” correspondent Hasan Minhaj and former Minnesota senator Al Franken. Each will reportedly appear for weeklong stints.

Noah, whose latest comedy special, “I Wish You Would,” premiered last month on Netflix, will be returning to stand-up comedy.

The Emmy Award winner will embark on his national, 28-city “Off The Record” tour in 2023, kicking it off on Jan. 20 in Atlanta. At press time, it will end on Dec. 3 in San Francisco. Produced by Live Nation, Noah’s tour will include stops in St. Louis, Boston, Memphis, Tennessee, New Orleans, New York, Phoenix and Detroit. Other dates — stateside and international — may be added.