OPINION: Celebrities have rallied in support of the play, which explores what happens when Black Americans decide to "go back to Africa."

What if the U.S. government offered every Black person a free one-way plane ticket back to Africa? How would we respond? How would we feel? That’s the thrust of an extraordinary new Broadway play called “Ain’t No Mo’.” In several hysterical vignettes, we explore the modern African-American experience as we near its end. The play is ostensibly about Black people leaving America, but it’s really about being here in America now. It’s a look at being Black. 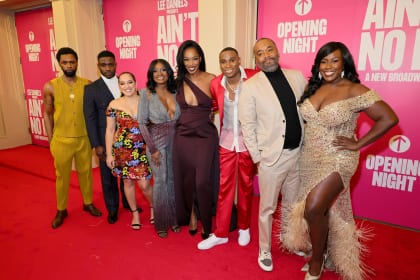 Also Read:
Tyler Perry, Will and Jada Pinkett-Smith among those fighting to keep open Broadway play, ‘Ain’t No Mo’

We go through a church service, an abortion clinic called Sister Girl We Slay All Day ‘Cause Beyoncé Say Community Center, the taping of a reunion episode for the reality show “Real Baby Mamas of the Southside” and more. The glue of it all is Peaches, an airport gate clerk for African American Airlines, which is the airline behind this mass movement to the east. Peaches is played by “Ain’t No Mo’” creator Jordan E. Cooper, the youngest Black playwright in Broadway history, who’s also an unforgettable performer.

Peaches helps passengers board but must also somehow figure out how to get the essence of Blackness onto the flight, symbolizing the way that, even though we give America the side-eye, and sometimes we hate America, we are also so deeply influenced by America that we are American. If we were to leave America en masse forever, we would become something substantively different. We cannot escape the truth that while we have shaped America, America has also shaped us, for better and for worse.

“Ain’t No Mo’” rockets from madcap comedy to deep statements as it explores what it means to be Black in today’s complex world. A reality-show taping devolves into chaos when it’s revealed that one of the characters is “transracial” and in need of Hennessey and “The Color Purple” to keep up her “Blackness.” When she quotes Dr. King, all hell breaks loose. It’s a glorious mess. Later, a family of upper-class Blacks — the sort who dress super preppy and don’t really see themselves as one of us — are shocked when the floor opens up and an enslaved woman leaps out at them. Of course, she has magical superpowers. The play dances between biting caricature and searing realness though sometimes it’s magical realness.

It all moves at a relentless pace. It’s a play that feels fast; there’s no wasted time, and the dialogue is kinetic and crackling with energy. The play doesn’t feel like typical Broadway; it’s much more vibrant and alive. It’s no surprise that it’s gotten some strong reviews. Variety wrote that it “wrangles rhetorical fantasy into a rollicking, high-concept sitcom, mining dark comedy from the horrors of racism and the particulars of Black life. Explosive as a hand grenade of laughing gas, it’s heady and hysterical and fearlessly provocative. Its keen observations about race as both social construction and lived reality crackle like a lit fuse.”

But there’s a serious problem — the play is on life support. It opened on Broadway in early December, and it has the support of a slew of stars — producers include Lee Daniels, Jeremy O. Harris, Lena Waithe, Dwyane Wade, Gabrielle Union, RuPaul and more. But after just two weeks on Broadway, it was announced that the play would close in weeks. It wasn’t making enough money. Then the date was extended — as of this writing, it will go on until Dec 23. It’s become a bit of a cause célèbre as people fight to save it — several stars have bought out performances including Will and Jada, Tyler Perry, Queen Latifah, Shonda Rhimes and Sara Ramirez. A hyper-Black play like this that explores Blackness in general and has no major white characters is a hard sell on Broadway where most ticket buyers are white. Generally, white people won’t go to see plays, or any sort of art, that explores the Black experience deeply and honestly. In many ways, we built America, and we are the creators of so much of American culture, but the more effectively our art probes into Blackness, the less likely white people are to consume it. So if we want to see great Black art, if we want plays like “Ain’t No Mo’” to exist, we have to support them.