The Los Angeles Lakers star is less than 400 points away from tying Kareem’s all-time record.

The Los Angeles Lakers star, 38, is now only 363 points away from tying Kareem Abdul-Jabbar’s all-time record of 38,387 points in his nearly 20-year career. CNN is reporting that James needed 11 points to reach the milestone of 38,000 points, which he achieved in the first quarter of Sunday’s game between the Lakers and the Philadelphia 76ers.

James ended the game with 35 points 10 assists and eight rebounds but the Lakers ultimately lost 113-112.

“It’s just frustrating, getting into those positions and not being able to come out with a victory,” James told reporters after the game, according to NBA.com. “We got the stop, gave ourselves a chance to win, and didn’t execute. We’re playing good basketball. We’re just not winning games.” 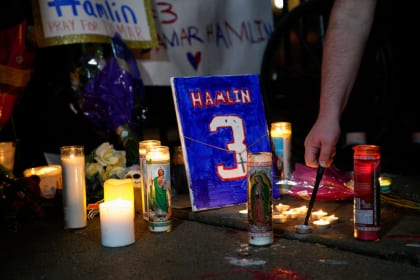 Also Read:
Instead of the NFL offering ‘thoughts and prayers’ to injured players, it should consider guaranteed contracts

As NBA.com reports, there was 5:43 left in the first quarter when James helped the Lakers take a 20-17 lead with his mid-range, 20-foot jump shot over P.J. Tucker off an assist from Lakers point guard Russell Westbrook.

Meanwhile, in April, Abdul-Jabbar took a few shots at James when he told the Los Angeles Times that the Ohio native should be “embarrassed” by some of the things he’s done regarding the COVID-19 vaccine. He later sent a statement to the newspaper clarifying his assertions, theGrio reported. 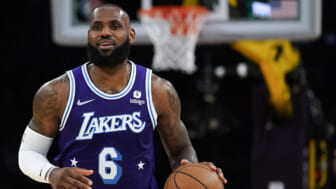 In the note to the Times, Abdul-Jabbar wrote, “I have chided LeBron when I thought he was dropping the ball when it came to supporting the community. But I did so in the spirit of a loving older brother offering guidance, whether wanted or not. So, when I said that he has done some things he should be embarrassed about, that wasn’t a slam or a barb or even a finger wag, it was me recapping some of what I’d said in the past.”

James reportedly did not want to speak about him closing in on Abdul-Jabbar’s record. One Twitter user noted that the NBA icon “got the assist of 38k pts from Westbrook.”