“His election is another narrative on our journey toward a more perfect union, which symbolizes the progress that has been made in America,” said Democratic Minority Leader Hakeem Jeffries.

On Moore’s historic swearing-in as Maryland’s first Black governor, the 44-year-old political newcomer tells Ryan that his campaign made it a point to show that Republicans are not more patriotic than Democrats. Moore, who ran against Donald Trump-endorsed Republican Dan Cox, is a U.S. Army veteran and positioned himself as a trusted patriot. 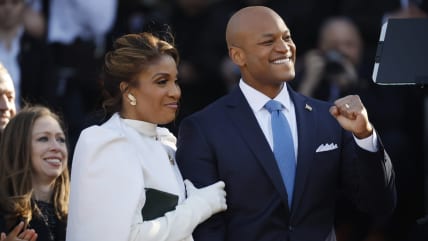 Drawing a contrast between him and Cox, Moore continued: “If you talk about people who love this country, how about the people who have sacrificed and bled to make this country better? Patriotism is not saying that you love the country, but you hate half of the people in it.”

“His election is another narrative on our journey toward a more perfect union, which symbolizes the progress made in America,” said Jeffries. “We still have a way to go, but we can be confident that America is on a positive, hopeful trajectory when we see the emergence of leaders like Wes Moore.”