Patrons at a Kentucky restaurant claim they overheard videos of Taylor's shooting death at an event featuring Sgt. John Mattingly, an officer who was involved in the deadly police raid.

According to CNN, the Bowling Green-Warren County Branch of the NAACP and witnesses claim that John Mattingly, one of the Louisville Metro Police officers involved in the ill-fated raid at Taylor’s apartment on March 13, 2020, who has since retired from the force, was a featured guest at the event Tuesday night.

“These events may be controversial, however, we believe Sgt. Mattingly has the right to share his experience,” the women’s group said in a statement beforehand, CNN reported. “Other individuals with firsthand experience relating to this case are welcome to request an opportunity to speak to our organization as well.”

The NAACP said the event was postponed at its original location because of its “controversial” nature, but it went on as scheduled upstairs at the Greek restaurant.

While seated at their dimly illuminated tables, two diners claim they overheard audio recordings of gunshots, sirens and other commotion. However, neither could confirm whether or not they were videos capturing Taylor’s demise.

“They had a sound system,” said Cayce Johnson, who observed what was happening upstairs as soon as she entered the eatery, according to CNN. “It was being broadcast throughout the whole restaurant. We could hear every word. And when the lady introduced John Mattingly, my jaw dropped.” 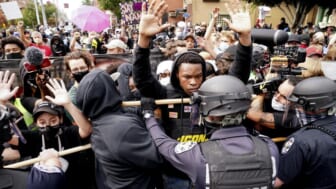 Katelyn Jones, another customer, claimed that although she couldn’t see what was happening, the loud sound of gunfire, sirens and police radio chatter made it difficult for her family to converse with one another. The gathering attendees upstairs started to silence her relatives, Jones said, when they complained about the loud recording.

Mattingly was the first officer to enter the home of Taylor, a 26-year-old emergency room technician, after Louisville Metro Police executing a search warrant broke down the door.

Authorities claimed they identified themselves as police before forcing entry into Taylor’s residence, but Kenneth Walker III, Taylor’s boyfriend, fired a single shot at the officers because he believed they were intruders. Mattingly suffered a gunshot wound to the leg, and police returned fire, killing Taylor.

Despite being placed on administrative leave, Mattingly — who has consistently defended his conduct — retired and was never charged for the incident. Brett Hankison, the lone cop charged in the botched raid, was cleared of all wanton endangerment charges.

Johnson told CNN that Mattingly went through everything, discussed the investigation and then played multiple videos throughout his presentation at the restaurant.

She wants the Republican Women’s Club of South Central Kentucky to apologize to Taylor’s kin, noting that they had deleted their Facebook profile and were “just laying low.”

“I want accountability from this group. They give powerful people platforms, and they need to explain to the community and Breonna Taylor’s family why they gave him [Mattingly] a platform,” Johnson said, according to CNN.

The NAACP pointed out that Mattingly had access to camera equipment, a microphone and a speaker and could be heard throughout the restaurant as customers were forced to watch and listen to graphic details of the incident that claimed Taylor’s life.

“It is beyond reprehensible to subject anyone, let alone children and customers of African American descent, to such indecent exposure, graphic and upsetting images while they were attempting to enjoy their meal,” the NAACP said, CNN reported.