More than 40% of queer folks of color identify as bisexual, according to the Human Rights Campaign, so why all the stigma around the sexual preference?

This week on the Dear Culture Podcast our hosts, theGrio‘s Social Media Director, Shana Pinnock, and Managing Editor of Politics and Washington Correspondent, Gerren Keith Gaynor, unpack harmful stereotypes and talk the miles left to travel in the journey to queer acceptance as a community.

According to a recent Gallup Poll, the number of people who identify as bisexual in the United States is rising. In fact, this number has increased from 1% to 3% in the last decade or so but despite these numbers, the stigma around bisexuality still remains.

This week’s guest, Tim’m West has worked as an educator and activist in K-12 public schools and at the post-secondary level, teaching and serving as department chair in Oakland and DC. He has also taught at The New School, Stanford University, and Humboldt State University where he is currently a visiting lecturer in their Department of Critical Race, Gender and Sexuality Studies. He currently leads LGBTQ+ community initiatives at Teach For America, working nationally to advance safer and braver classrooms for LGBTQ+ students and their educators.

West, who identifies as pansexual, shared that part of his sexual journey included working through other people’s confusion and mistrust around his sexual identity.

“There’s almost a doubt and the suspicion that if you acknowledge attraction to both, that there’s some dishonesty there, there’s some confusion there and I think it really goes against all the science that we know about sexuality in the continuum,” said West. 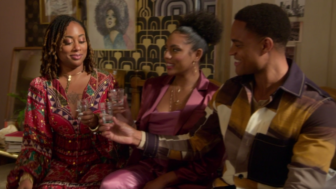 Gaynor said he believes that the lack of safe space for Black men in particular to explore their identity and sexuality is directly related to the bi-erasure and bi-phobia that exists both within Black culture and the larger culture.

Tune into Dear Culture to listen to this incredible conversation in its entirety.