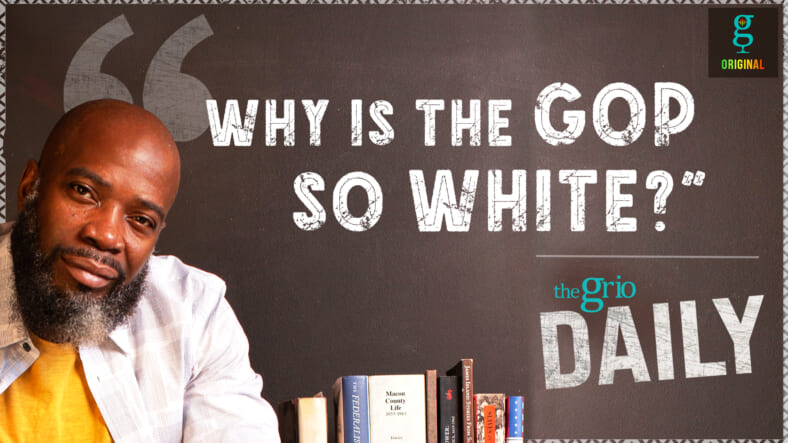 Why Is the GOP So White?

Why is the GOP so white?” Michael Harriot answers the age-old question, why is the Republican Party the party of whiteness?

Michael Harriot [00:00:05] I’m Michael Harriot and welcome to theGrio Daily, the only podcast that actually knows what it sounds like when doves cry. So coo, coo, coo, coo, coo, coo, coo. I think it’s something like that. Anyway, we’re here every day to give you a little mix of current events, politics, Black thought. And of course, we can’t leave the white people out. So on Wednesdays, it’s Wypipo Wednesday.  We dedicate a special day to investigating and interrogating whiteness. Because, you know, we believe in diversity and inclusion here at theGrio, four things that we do for white people witnesses. Maybe we should talk about why the Republican Party is the party of whiteness. Because I’m gonna keep it real. Like. White people really do like the Republican Party.

Michael Harriot [00:03:34] Let’s not have the idea that, you know, the North was just filled with Black people and the South was where racism resided now. It was just racist white people all over. But. After the Republican Party was founded. There’s also another myth that, you know, Black people really supported Republicans. Now, it’s kind of true, but it’s really something that we can’t verify because most of the Black people lived in the South after the Civil War and most of those people were prevented from voting. And the reason they were prevented from voting was because of the compromise of 1877, which gave us Jim Crow. Let’s disabuse ourselves of the notion of Republican and Democrat for right now, because there’s another thing that you need to know about. See, Black people voted for Republicans, but Republicans didn’t support Black people. Because when we talk about the Republican Party, we’re not talking about one giant swath of people across the country because you don’t know about the Lily-white. In 1888, there was this texan named Norris Wright Cuney. He was a Black Republican and he was elected chairman of the Texas Republican Party. And it was like the first time a Black person had held this elective position because, of course, you know, Black people wasn’t voting for that long.

Michael Harriot [00:05:12] Well anyway, the white Republicans, those same Republicans who told you they ended slavery and they fought for Black people’s right, those Texas Republicans fought Cuney because of course, he was Black. And so they used the Jim Crow laws to just kick Black people out of the state convention. And they called themselves the Lily-white movement. Well, that took root all over America. There was Lily-white parties in North Carolina, in Virginia. I don’t want to confuse this with Lil Wyte, who’s probably a white SoundCloud rapper that I’ve never heard of. I bet you there’s a rapper named Lil Wyte. So when this Lily-white movement took over, especially in the South. The Democrats started gaining power. So what did the Republicans do? They weren’t going to solicited Black people, naw they didn’t need us that bad. What they started doing is recruiting white people and the only way they can recruit white people in the South was to be more racist than the Democrats. So, when you talk about those Democratic KKK members, notice you never read about the Republicans who convicted them. Notice you never read about the white movement of Republicans who fought the KKK tooth and nail to preserve Black freedom is because there are only two parties. White people and everybody else, the southern conservatives and everybody else.

Michael Harriot [00:09:59] So remember when someone asked you why we think Republicans are racist? Tell them you don’t know. Ask Republicans why they act so racists. Thank you for listening. And remember, don’t forget to download theGrio app. Listen, subscribe and listen to the podcast every day. We’re here every day. And look, I’m telling you that they’re really all my neck about you downloading this app. Like, even if you listen to it on like Spotify, whatever, just download the app, right? Like, this helps us out. I’m not asking you to pay for this podcast. I’m not asking you for a donation. I’m not even asking you to. You know, wear a Michael Harriot is the greatest podcast ever. T-shirt. Those are coming, those have been sent to print yet? All I’m asking you to do is just download theGrio app. Subscribe, listen to us daily. And as always, we’ll leave you with another blank saying, I trust the republican as far as I can throw them. So let’s see how far we can throw them. Peace and we out.

Michael Harriot [00:11:07] Thank you for listening to theGrio daily. If you like what you heard, please give us a five star review. Download theGrio app. Subscribe to the show and share it with everyone you know. Please email all questions, suggestions and compliments to podcasts at theGrio dot com.