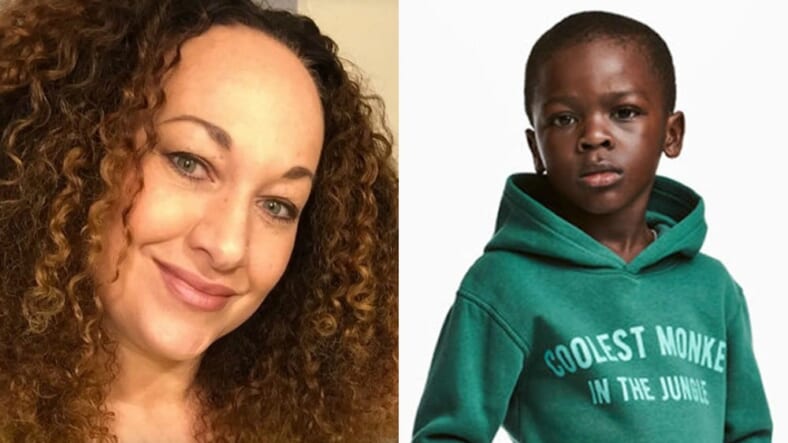 Rachel Dolezal is weaseling her way back into the headlines again.

The infamous imposter, made internet famous for trying to pass her life off as a Black woman, is selling a hoodie in response to the scandal surrounding H&Ms tone-deaf ad that featured an adorable Black boy in a sweatshirt that says “Coolest Monkey in the Jungle.”

Now, Dolezal announced that she’s protesting by releasing a revamped version of the hoodie that say “Coolest Prince in the Hood” and we just need her to take several seats and see her way out of this situation.

“I have a hard time seeing how this is a protest hoodie. What results do you expect this to get that will benefit the greater community and not just your pockets!?! I hate to question this because I’m sure it does hit home, but the timing and the verbiage on your hoodie seems no less offensive than what H&M did. It don’t sit well with me,” wrote an Instagram user.

So, I did a first design in response to H&M’s “Coolest Monkey in the Jungle” shirt that said “Coolest Prince in the Hood,” because it’s a hooded sweatshirt/neighborhood, etc. Some people liked it, some didn’t like the word “hood.” I called production and asked them to change it to “Coolest Prince in the World.” So, if you want one of the updated ones, go to the link in the bio. If you still don’t like it, ✌?#hoodieseason #kidscomefirst #courageousconversations

Dolezal claims it’s for the kids

Rachel Dolezal took to social media to explain her reasons for trying to make some coins from the controversy.

“I had to… because my son was called a ‘monkey’ in second grade, and I remember going to the principal about it. After educating the school officials about the historical context of the slur & demanding they operate under a zero tolerance policy for this type of harassment, the student was suspended. But, due to his parents being ‘offended’ that he was disciplined for calling my son a racial slur, they pulled him from public school and homeschooled him,” she posted.

“This hits home with many of us moms, I’m sure. So, I spent today designing this new hoodie that my little son will soon be wearing with pride.”

Designing a hoodie for her own child to wear is fine but to try to profit off of the public pain of this child should be beyond shady even for Dolezal.