The stars are aligned at the 2018 Grammy Awards, and music’s brightest are shining on the red carpet at New York City’s Madison Square Garden.

TheGrio‘s Style Correspondent Johnny Wright is on the Grammy Awards red carpet scene giving his take on the night’s most daring and breathtaking fashions.

The hairstylist to the stars and former HOTUS (Hairstylist of the United States – Hey, Michelle Obama!) breaks down his favorite looks, and who he thinks is giving us sartorial realness. Get into it below. 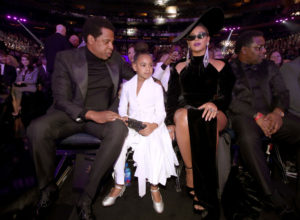 “This is royalty. Our king, queen and princess have arrived. I love the thought that Beyonce puts into her looks (and of course for Blue as well) because this is what you would call the opposite of effortless. I mean she’s a Virgo. She was born to be dramatic. And with Jay, we are seeing yet another turtleneck, which seems to be thing this year.”

“She still sticking to the black and white theme and she found a way to add some color, which I just love. This look is an extension of her structured look and I feel like she’s on the verge of introducing us to someone new. In my book, she can do absolutely no wrong!”

“His necklace looks great and I love where the pants stop allowing his shoes to have their own moment. It’s a throwback look, but it still looks fresh. He does look very winter reminding us the Grammys are in New York this year.”

“I love the pop of color and the texture of Ne-Yo’s jacket. I know it’s his thing, but I would have loved to see him get rid of that hat for once. He’s committed to it but he’s such an attractive guy. People want to see more of his face.”

“Her lips and cheeks are so subtle, but those eyes…it’s all about those dark, smokey eyes! I’m in love with this look on her.”

“This isn’t fashion to me. Point. Blank. Period. I get that she’s trying to make a statement but I’m not a fan of doing that on the red carpet. But, hey, the Grammys are all about taking risks.”

“The turtleneck is SUCH a trend tonight. This is his breakout year and really, his first moment on a major red carpet. I say he did very well.”

“Rick is giving you all the grandeur and it looks like he has lost even more weight. When the big boys loose weight, they want to show off. Right here, Rick is indeed proving that he is the BOSS.”

“This is my favorite color green. I am loving the green suit, but not the red shirt under it. That’s a bit of a fail.”

“Cardi B can do NO wrong in my eyes right now. I think she looks like a wratched angel! Her lacefront is placed perfectly and I love the tendrils falling down the sides to perfectly frame her face. Her makeup is just beautiful and of course she’s wearing Louis Vuitton shoes. Haven’t heard about those red bottom, bloody shoes!”

“I love it! I love that he wasn’t afraid to do white in the winter. It looks just great.”

“John Legend never takes risks. He has become comfortable and completely predictable on the red carpet. Chrissy on the other hand…I’m all for being a slave to fashion, but not when you are this pregnant. I feel like that belt is cinched tight enough to hurt the baby. It looks painful.”

“COMMON KILLED IT! In all capital letters.”

Grammy arrivals! Me and my boo looking sharp in black So happy for my mans nomination for the song,”Black Hoodie” #BodyCount Dress from- @_reve boutique Designer-Jessica Bara Shoes and purse- Tom Ford

“Ice looks cool as always, but isn’t this a throwback of what Laverne Cox did last year? I pay attention and I know other people do to.”

“Rita Ora is elegant, chic and mysterious and I love her throw back hair. I like the architercture of  her dress.”

“I love it, but I would have preferred a little more of a neckline. Other than that, I think she looks great. Her hair looks perfect and her makeup looks good as usual.

“This is a bit of a departure from what usually wears. She typically wears her mother’s designs on the red carpet, so if her mom designed this look, she really did a great job. Her big hair is the perfect shape as well.”

“SZA has been labeled as the number one female singer nominated tonight and you can see why. I am loving the messy hair and with this makeup, she is highlighted perfectly. This dress is different from what we have seen her in prior. It’s elegant and expensive and this look will in fact open up new doors for her. She has a great body and looks like the ultimate weekend girl. She looks like a winner!”

“You can never go wrong on the red carpet with a tuxedo and for Shaggy, this thick pin-stripe is a nice, added touch. It makes his entire outfit look so much more expensive. Plus, it’s nice to see Shaggy back in action.”

“Her body looks fantastic and she is killing it. However…this looks very 90s and not in a good way. If that was her intention, then she succeeded. I do like that she played with color on her eyes and that bright, red matte lip. Although, I love all types of period hair, I’m waiting to see something different from Andra.”

“I’ll be honest…I’m not loving this red coat on Swizz Beatz. It feels like it’s just his attempt of doing something to say he did something. As for Alicia Keys, this outfit is just ok. I know she is committed to wear as little makeup as possible, but I would love to see at seem some contour on her face for this special day.”