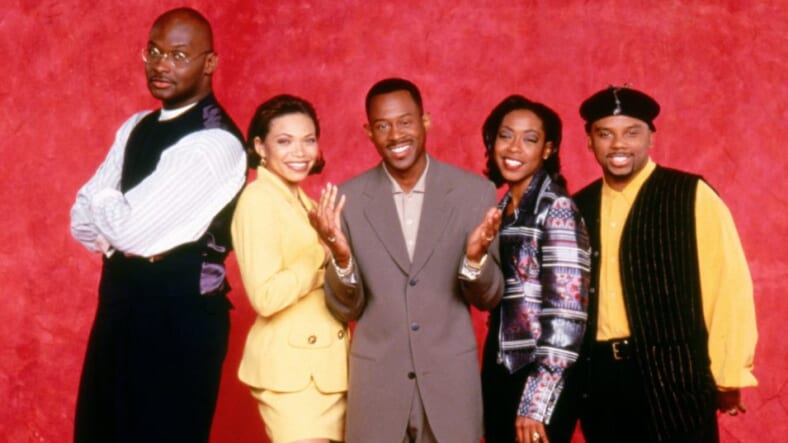 Martin Lawrence, Tisha Campbell-Martin, and Tichina Arnold were all smiles in Burbank, CA as they dished about the possibility of a Martin reboot. The popular sitcom aired on Fox for five seasons from 1992 to 1997.

Fans consider the series a classic. References to scenes and lines from the show are still a part of Black popular culture. In the video clip where TMZ caught up with the three stars, Campbell-Martin was even wearing a sweatshirt that said “That ain’t no damn puppy,” a nod to a line from a hilarious episode that every die-hard Martin fan remembers.

Filmed outside of a steakhouse, the three actors played coy at first when a TMZ producer asked if a reboot was in the works. Lawrence threw up his hands and said “Never say never,” as the trio traded knowing grins.

Arnold avoided the question, but mentioned new beginnings. Campbell-Martin was a little more blunt, talking directly into the camera and saying “We can’t tell y’all shit.”

When prodded for more information about how a reboot would compare to the original, Lawrence  said “We have to be funny, be entertaining and give people heart-felt stories.”

Though none of the actors said that a reboot was definitely happening, their answers to TMZ’s questions all pointed to a hearty “yes.”

In the 21 years since Martin left the air, all three have made their own way in Hollywood. Lawrence has starred in several movies including Life, Bad Boys 2, and Big Momma’s House.  Campbell-Martin has snagged a number of television and movie roles such as Sprung, All of Us, and My Wife and Kids. She has also released new music and opened a nightclub in Studio City, CA with her husband actor Duane Martin. Arnold also found her stride in television movies and series, most notably Everybody Hates Chris.

Though appreciative of all of their work, fans would love to see the trio revive the hilarious chemistry that Martin, Gina, and Pam had on the series.

Catch the whole TMZ interview below: