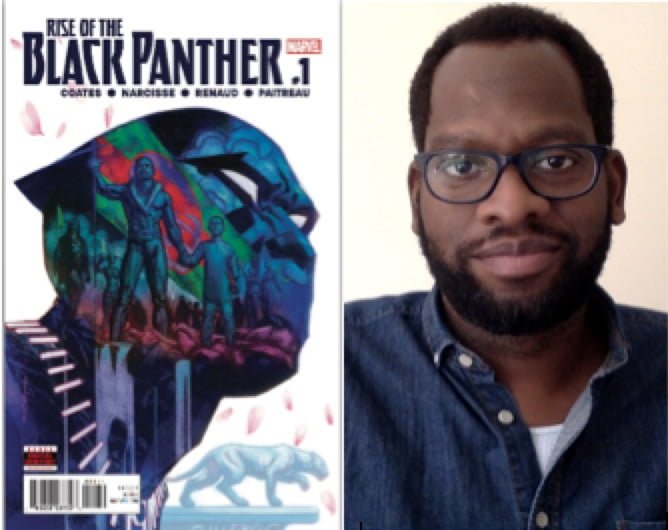 As a critic for iO9, Evan Narcisse is a bonafide aficionado when it comes to comics.

He has spent years writing about different series and has been an avid fan, immersed in the comic book culture since he was a kid. Now, he has been charged with crafting the backstory of his favorite super hero in Marvel’s new limited series, Rise of The Black Panther.

“It’s weird. It’s a lot of weight because I’m coming at this as somebody who, up until a year ago, was just a fan. As someone who has been reading these comics for 30 years or longer, I want to put enough new stuff in there where you get some revelations about where his character came from and certain moments in history that must have happened,” he explains.

“I want to push new readers to the stories that I loved. I want to create some curiosity in readers; the same kind I felt when I was a young where it pushes them to investigate.”

Black Panther isn’t the only Black super hero in the game, but he’s truly unique compared to others like Luke Cage and Black Lightning, and that’s part of what attracted Narcisse to the character.

“Luke Cage was in the hood and so was Black Lightning. Their concerns were wrapped up in narrratives about Black mythology, drugs, street crime. I grew up fairly middle class and so, I wasn’t adjacent to that stuff. Luke Cage didn’t speak to me in that way. He was hot-tempered and he spoke a lot of jive. He just felt more like a caricature compared to the experiences of people I know,” he says.

Unlike some of the other series’ offerings, Black Panther presented a character Narcisse could identify with on many levels.

“When I first encountered Black Panther stories in Wakanda, he was intelligent, he was compassionate, he was a scientist and he was even-tempered. I grew up with my mom always talking about Haiti and it being a place that was rich in history, but also a place where that history was neutralized. Being a child of immigrants, that resonated with me,” says Narcisse.

When the initial excitement wore off after being asked to write Marvel’s, Rise of Black Panther limited series Narcisse admits a bit of panic set in.

“It is the most frustrating aspect of this. This constant, creeping feeling in the back of my head that somebody else hit something that I didn’t or that I’m invalidating a story that happened already without knowing it. It’s very stressful,” he admits.

“This character has 50 years of publishing history to go through and I read as much of it as I could and as much as I felt I needed to, but I don’t want to be regurgitating the stuff I read before. I want to re-conceptualize it.”

Rise of The Black Panther focuses on T’Challa’s origin story and his life before becoming Black Panther while diving deeper into Wakanda’s roots and illuminating the country’s history.

Narcisse notes that our current social and political climate has created an ideal moment for a story like this to resonate with readers.

“With Trump being in office, we are seeing things that make us more mindful of the kind of racist and oppressive tactics that we thought were over and done with. Immigration bans from brown countries; unfair, inequitable taxation practices that make rich people richer. These are the strategies that have had Black people on the margins before,” he says.

READ MORE: Early Review: ‘Black Panther’ is a masterpiece. Here’s why you need to see it for yourself.

According to Narcisse, the world of Black Panther paints a powerful picture of freedom black folks have never seen before and pushes against the boundaries of Black consciousness.

“The way Black Panther relates to it is Wakanda is a world where Black people are freer than they have ever been in the real world. Just to know that it can be like this, even in our imaginations, is amazing because in our imaginations is where they start to beat us down. The idea that we will never be as powerful all starts in the collective conscious. Black Panther is a denial of that disenfranchisement,” he continues.

In the film, fans are able to see Black people as a complex, beautiful entity instead of presenting the culture as a monolith.

“The movie is a big part of that too. This thing is going be Black from front to back. Dark-skinned women are up in there, front and center with romantic attention they don’t normally get in mainstream media. We will have factions of Black people going up against each other politically and philosophically. We have talked about this idea that we are not a monolith for decades, but we are finally going to see it in action.”