These ladies represent the best of the 2018 Winter Games in PyeongChang, South Korea. 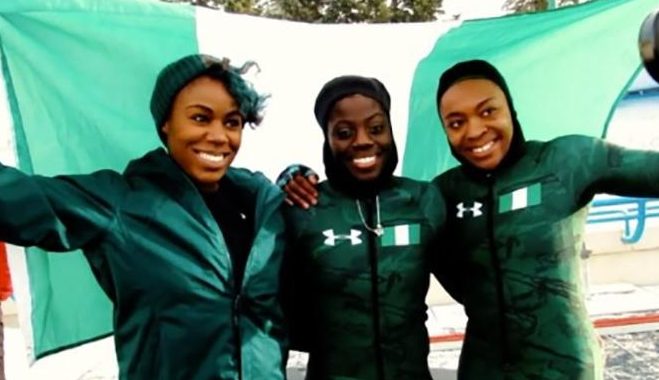 The women representing the Nigerian bobsled team in the 2018 Winter Olympics. (Courtesy of Twitter).

As if Black folks don’t have enough to celebrate this February, people of African descent are making history at the 2018 Winter Olympics in several events including speed skating, hockey, figure skating, skiing, skeleton and bobsledding. Nigeria is making history as the first African bobsled team to qualify for the 2018 Winter Olympics in PyeongChang, South Korea. Taking a page from the #BlackGirlMagic handbook, there are three amazing Nigerian-American women who are the first Nigerian athletes to compete at the Winter games.

Introducing a new generation of Nigerians

Ngozi Onwumere, Akuoma Omeoga and Suen Adigun will usher Nigeria into the Winter Olympics games by proving what Jamaica’s bobsled team proved in 1988—Black folks do winter sports and we do it well. This is evidenced by the 43 Black athletes from various countries competing in PyeongChang this year.

Onwumere, Omeoga and Adigun aren’t just exceptional athletes— they are exceptional people.  It is not unusual for Olympic coaches to recruit qualified talent from the Summer Games, but these women weren’t recruited at all.

Adigun decided to pursue her dream of becoming the first African to qualify for the bobsled team at the Winter Olympics by launching a GoFundMe page and handcrafting a wooden training sled she named, Maeflower. It is in honor of her late stepsister who died tragically in a car accident in 2009. A college educated woman who recently completed a master’s program in exercise and health sciences, Adigun coaxed her former college teammates away from their white-collar jobs to help pursue this seemingly unattainable dream.

Despite being members of the most educated immigrant group in the United States, the women initially had their doubts. What is the likelihood that three American women born to Nigerian parents living in Texas would be able to pull this off? They challenged themselves, networked with the right people and made it happen. Not only did they accomplish their goal, but they have received nothing but love in Nigeria, the U.S. and abroad. One only has to witness their rousing reception at the opening ceremony to see why.

These ladies may represent Nigeria at the Winter Games, but their presence goes even deeper. Their success completely challenges the dominant narrative of “lazy” immigrants of color who do not contribute to society being disseminated by Donald Trump and others of his ilk through venomous language and policy. As Americans born to Nigerian parents, Adigun, Omeoga and Onwumere offer a representation of the good things that often accompany immigrant families. Their success flies in the face of those who are committed to painting Black people, in general, and Black women, specifically, in the worst light. The visual representation of these dynamic woman draped in their Nigerian flags, transgressing social, economic, geographic and ideological barriers offers a great example to Black girls wondering if it’s possible to create this type of magic in a world often hostile to our very existence.

“Representation of our achievements is critically important,” says Dr. Chetachi Egwu, a communication faculty member at University of Maryland University College. “If we don’t have models of what is possible, we tend to think achievement in a particular field is impossible,” she adds.

READ MORE: TO BE YOUNG, BLACK AND UNDOCUMENTED

Nigeria’s bobsled team and the other Black athletes making history at the 2018 Olympics is more than just hype. It is a major accomplishment that will help change lives and may help to dispel some of the myths about immigrants of color. However, Vicki Michaelis, former Olympics reporter for USA Today and now a sports journalism professor at the University of Georgia cautions the optimism.

Michaelis says that the same coaches who are vehemently against American athletes choosing to represent their ancestral countries despite being trained here can use this example to support their opposition. Yet, white athletes who are from immigrant families have been choosing their parent or grandparent’s home countries for decades.

“In college sports in the U.S., there are certain coaches or factions that are opposed to U.S. colleges and universities recruiting international or immigrant athletes because they receive training in the United States and then represent their home countries in Olympic sports,” she says. “Most host countries don’t have athletes in every sport. Sometimes they have to go and recruit athletes to compete in specific events.”

Do you believe in magic?

The Nigerian bobsled team is making the most of this opportunity, picking up endorsements by Visa and Under Armour and appearing in a Beats by Dre commercial. Adigun, Omeoga and Onwumere have clearly let their haters become motivators by continuing to add diversity to the Winter Games, something that is still needed in 2018.

“The Winter Olympics have struggled with diversity since its inception because of how these sports are geographically based. It’s hard to learn how to be a bobsledder if you don’t live somewhere near a bobsled track,” says Michaelis. “We’re seeing the first African-American speed skaters. There’s also a Jamaican women’s bobsled team. There’s more progress in terms of diversity and inclusion and this Nigerian team is definitely a part of that progress.”

If you want to see #BlackGirlMagic in real time, just watch Adigun, Omeoga and Onwumere as they compete on Tuesday, February 20, demonstrating the best of Africa and America. Their success showcases Black excellence and grit, while destroying hateful rhetoric and policies that would suggest otherwise.

Nsenga K. Burton, Ph.D., is founder & editor-in-chief of the award-winning blog The Burton Wire. She chairs the Mass Media Arts Department at Clark Atlanta University. Follow her on Twitter @Ntellectual or @TheBurtonWire.