Kind of amusing to watch them take Ls

Real talk: I’m thrilled that social media as we understand it, didn’t exist until I was well into my 20s. Sure, I had AIM (rest in peace) and Black Planet in college, but neither had anywhere close to the reach and cultural significance of today’s social media. I got into enough hot water with my college newspaper column – I don’t even want to think about what an unrestrained 20-year-old Dustin would look like putting his thoughts out to the world on a whim.

When Twitter became a behemoth around the end of this century’s first decade, it promptly contributed to jacking up entire lives of people who didn’t know what to do with it. I never got caught up by it because I had grown-ass-man-sense by then, but people born after the movie Belly came out don’t remember a world without social media. All these 2000s babies know is a world in which their every thought and idea can be propagated to the entire world with the click of the “send” button.

I’m convinced that today’s infants will come of age in a world in which someone has built an entire industry around social media etiquette. But we aren’t quite there yet. So, we get to watch these young people jack up their lives by typing or saying inexcusably stupid shit that other people can see.

Everyone knows that the anonymity of the internet racist provides people the opportunity to spew their virulence unchecked. But even those racists are probably looking at these kids being naked about it like, “Oh no baby, what is you doing?” I blame Trump’s America for the fact that it seems to be happening so often in the still-nascent year – it’s the same America that produced the tiki-torch whites in Charlottesville last year. In fact, there’s an increasing amount of emboldened Michael Rapaport from Higher Learning types on college campuses, according to this study.

Still, there’s a super-sized level of schadenfreude in watching the future David Dukes of America get called out as their mamas hop on television shedding quinoa-salad tears, pleading for everyone to leave their babies alone. That will never get old.

Let’s roll the tape, shall we? 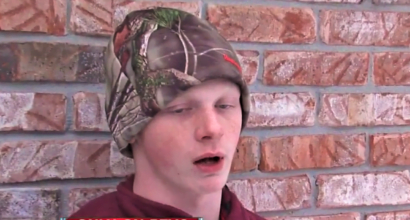 Mat Blood (which sounds like a name you’d hear in one of those 1990s HBO documentaries on white supremacist compounds) said he draped himself in a Nazi flag and yelled “nigger” over and over on a video on a dare. His dumb, 17-year-old, cornpone, small-Indiana-town ass spoke to the local news while chewing gum saying, “I’m sincerely, like, ashamed of myself” with all the sincerity of the time you said “sorry” for punching your little brother in the arm. I’ll bet you are, Mat Blood. We’ll all be waiting on that next racist tweet.

University of Alabama student Harley Barber posted two videos on Instagram of her dropping the N-bomb like it’s the word “the.” The university gave the 19-year-old the boot and her sorority publicly denounced her, forcing Barber to publicly admit to doing something “really, really bad.” I’m sure Barber’s father is somewhere wondering where he went wrong, thinking he’d rather his daughter wound up on the pole.

Like Barber, Georgia State University student Natalie Martinez used her “private” Instagram page (which kids apparently don’t realize is an oxymoron) to talk about all the n-words she’s forced to be in contact with. She got the boot from her soccer team, but a petition to expel her motivated Martinez to take the you-can’t-fire-me-because-I-quit approach and withdraw from the university. She might be the only Latina example in this list, but according to my Puerto Rican ex-wife, no one hates Black folks like the Latinx community!

I’m sure that this wasn’t the very first examples of idiot kids caving in their whole lives by being trash on the internet. But these two girls in Gainesville, Fla. had the presence of mind in 2012 to create long YouTube videos bitching about how awful their lives are because actual black people receive public assistance, and it was the first time I remember public outrage being heavy enough to drive them from their high school and to motivate their mamas to plead with folks to stop harassing them. Five’ll get you 10 says those mamas probably feel the same way as their daughters about those evil, lazy, shiftless black folks.

If you’re convinced that any of these people are actually sorry, I’ve got a bridge to sell you. And then you can jump off it because your brain power isn’t contributing to society.