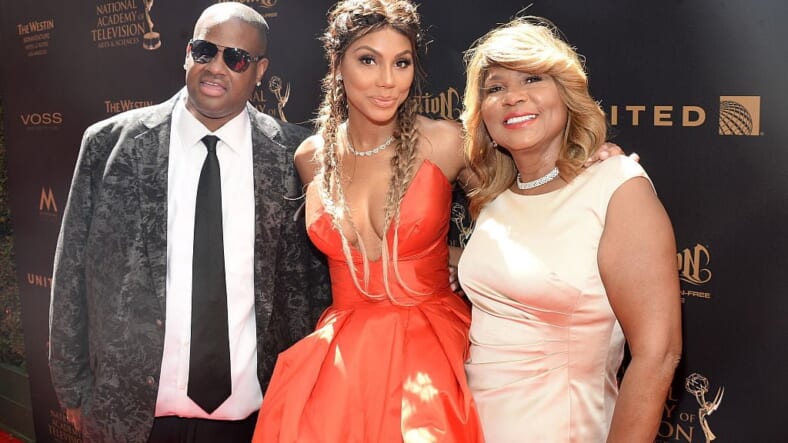 walks the red carpet at the 43rd Annual Daytime Emmy Awards at the Westin Bonaventure Hotel on May 1, 2016 in Los Angeles, California.

Tamar Braxton publicly announced that she had filed for divorce nearly four months ago. And immediately there were rumors swirling in the streets of a secret love child, extramarital affairs, and domestic abuse, which her own mother helped fuel.

Appearing on The View, Tamar Braxton discussed her marital status and the reason for her disappearance from Instagram.

Beginning by addressing rumors that all of the drama was concocted solely for reality television ratings, Braxton stated, “I absolutely have no reason to lie about my marriage or the things that [are] happening in my marriage for ratings. I think that’s disgusting and I would never sell my soul to the devil like that. It’s not that serious. Marriage is a serious thing for me and for my family.”

“I have a regular marriage and in regular marriages just like everyone else, things happen,” said Tamar Braxton. “In my marriage, it was just to a point where I felt like divorce was the only option I had left.”

–One hater learned the hard way that Michael B. Jordan’s Twitter clapback game is strong–

Vincent Herbert was also present during the interview—but as an audience member.

“Although we’re in extensive counseling and that is much needed and it always will be,” Tamar continued, “I think the bigger picture of everything is that we have a responsibility to my amazing 4-year-old son. Just to raise him in the most comfortable, amazing, loving and secure household that we can—that’s why we don’t live together.”

She made it clear that she definitely did file for divorce and was continuing with the proceedings.

Tamar Braxton experienced a highly publicized social media meltdown as a result of the troubles in her marriage and she explained why she felt the need to take a break.

“Keep people out your business,” she said. “It was my fault where I put myself in a position where I opened up the floor for people to give their opinions on my marriage. I have to take responsibility for that. And you also have to take responsibility for telling too much of your business. Because people always feel like they can tell you this, they have a hand in this or ‘oh, girl, did you hear about what happened?’ but not everyone wants to see you happy…I do air my dirty laundry, however, I’ve never been that specific and I should’ve been specific enough to say, ‘well this is what my so-called friends were saying.’”

Vince Herbert eventually joined Tamar during the interview on The View, and was asked point blank if the rumors of his secret love child were true. He responded, “Absolutely not. And all the other allegations are not true. I’m just not that kind of person. I love this lady with all my heart and I love my family with all my heart and I will never stop fighting for my family and trying to be great.”

Last week, Evelyn Braxton suggested that Herbert could get violent with her daughter Tamar, telling TMZ she had a message for him: “Keep his hands off of my child. Stop before he hurts her or kills her. I love him, but I don’t want him to kill my child. [It’s] as simple as that—I think he needs to go and get counseling. I really and truly do, before someone gets killed.”

Tamar is reportedly upset that her mother aired her dirty laundry and is now refusing to shoot with her for the upcoming season of Braxton Family Values. The two are rumored not to be on speaking terms.