Will the Pink Tea Cup crew be able to leave the bedroom drama at the door this season? 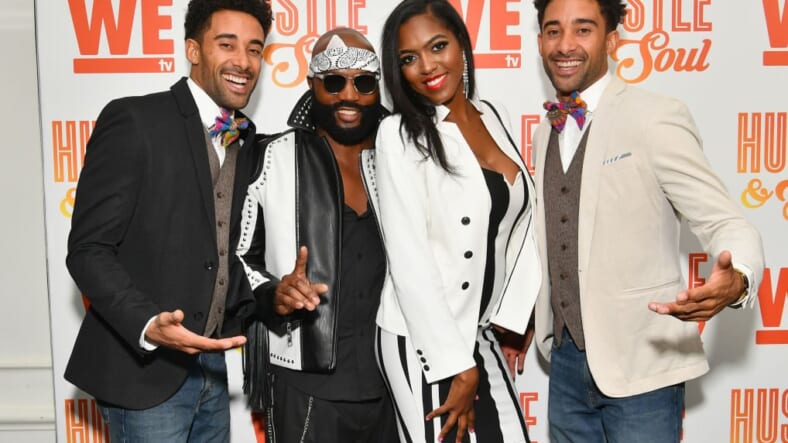 Chef Lawrence Page and crew are back for another season of Hustle and Soul.

Last season, viewers watched Lawrence—chef and owner of Brooklyn soul food restaurant Pink Tea Cup—get entangled in workplace/bedroom drama. The flirtatious, cooking lothario employed both the mother of his child, Ana and a woman with whom he was in a “situationship.” Between the three of them and the feisty, opinionated, handsy, women Lawrence employs—last season was full of smashed bottles, thrown glasses and flying fists.

Season 2 (which debuts on WE tv on March 22 at 10 pm EST) picks up where they left off last year. TheGrio caught up with Lawrence and Ana for an exclusive interview where the couple dished about the swanky new Pink Tea Cup Villa opening up in Miami, any regrets from being on the show and an update on the state of their explosive relationship.

theGrio: What did you learn about yourself from watching the first season?
Lawrence: Now, I see what other people see. I always knew that I was very passionate at being a chef and now I learned that people can actually see the passion in me. From all the feedback I got from fans from around the world. I learned that all the hard work and sweat I put into it, people actually felt it. Besides the drama, they actually felt the passion I have for food.

Ana: I’m very straight forward and business-minded. I learned that sometimes people take that as harsh. I’ve softened up a little bit. You don’t see many female managers and restaurant owners. When men are aggressive or focused it, it’s ‘Oh, he’s about his business,” but when I did it, it came off like I’m hard. I’m working on how people perceive me, but, it’s just that I have a goal.

theGrio: How do you toe-the-line between what makes for good tv and what makes good business sense?
Lawrence: It’s a balance. Most chefs would probably not do reality television. They would do cooking championship shows and Food Network and things like that. For me, growing up making everything from scratch in the kitchen and also building my business and boot strapping to become a millionaire, I learned that working on things from scratch works for me. This Hustle and Soul reality show for me was scratch, so I’m gonna take it and make it work.

I’m the chef who hasn’t been to culinary school, but I’m giving soul food the spotlight it deserves. People didn’t really think of soul food as real dining. I’m learning that there’s a balance with this. It comes with the territory. Our business has shot up like 40 percent since we started the show. As I’m finding that balance, I’m also taking care of other things. Most men have a weakness, but I’m discovering mine and I’m working on it.

theGrio: Speaking of weaknesses, do you have any regrets from the first season?
Lawrence: I would not have hired certain people on my team. That’s the regret. I’m learning that as as a restauranteur, this business has a huge revolving door. There’s always going to be people in and out of the restaurant. It’s not like back in the day when my mom would stay at her job for 25 years and retire. Now people are going to stay with you for a minute and leave. I learned to keep the revolving door open and just hope the right people become family and don’t bite you.

theGrio: So, who exactly do you regret hiring?
Lawrence: I can’t answer that. You gotta watch the show.

theGrio: I watched the first season.
Ana: So you know who it is…
Lawrence: That will unfold in season 2. Folks have to tune in.

theGrio: What can viewers expect this season?
Ana: Season 2 is the women’s season. Lawrence is still here as the macho leader, but it’s our season. We are showing our character, showing who we are and showing what we can do. We all have our goals. Women all over the world are going to be proud to watch women do their thing on this show even though there’s drama. You can’t get rid of the drama.

theGrio: An argument could be made that last season was the women’s season, but there were lots of fights and arguments.
Ana: That was single ladies season. This season, we all have our head on straighter. Now, it’s like ‘Hey, let’s focus on business.’ Everyone has worked on themselves. I have worked on myself tremendously. Things I would have said before, I don’t say now. I just say it in the back of my head.

theGrio: I heard you have a new Miami location opening up. How is that coming along?
Ana: I’m part-owner and the Pink Tea Cup Villa is my baby. I’m opening very soon within the next month or two. It’s right in the heart of South Beach. It’s gonna be so lit! It’s 7,000 square feet, three bars, and it’s a lounge at night.  It’s the splashy Miami you see on T.V.

Lawrence: We’re taking it to another culinary level. It’s a high-end restaurant. We’re doing Southern food with a Latin twist. With Ana’s Latin background and my Southern background, it’s perfect for Miami.

theGrio: Does this mean you are splitting your time between New York and Miami?
Ana: Nope. I’m in Miami full-time and I love it!

theGrio: That’s great. How are you two doing? What’s the status of your relationship?
Lawrence: It’s going strong. Our relationship is amazing. We’re closer than we ever were. In all the years we’ve been together, the show actually brought us closer together.

Ana: It’s like we had this house we had to tear down and just completely build over. Now, our foundation is solid.

theGrio: You think you’ll be able to avoid the reality show curse that befalls so many couples on television?
Lawrence: Yeah, I admitted to my faults. That’s the thing…when a man admits to his faults, it’s different.

Ana: Well, you kind of admitted.

Lawrence: My mama said the truth shall set you free.

Ana: Yeah, well that only applies if it’s the whole truth, not the half truth.

Watch this exclusive sneak peek of Season 2 where Lawrence is attempting to break things off with his employee/lover (who is not Ana).