Driver plows through crowd at gay bar and kills one

Bystander Jared Jacob was hit and killed as Cordalé Robinson tried to escape a brawl in a vehicle. 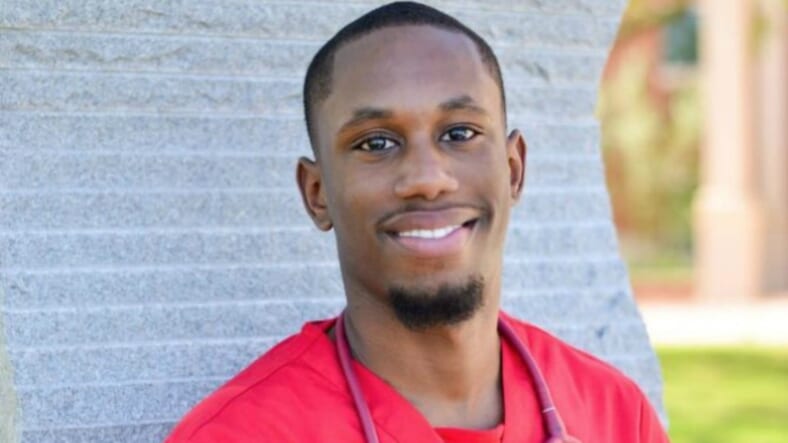 A Houston driver has been charged with aggravated assault and murder after killing an innocent bystander following a fight.

ABC13 reports that Cordale Robinson, 25, was reportedly involved in a physical altercation when he attempted to escape the chaos. Speeding away, he drove his car through a parking lot at the Bayou City Bar & Grill in Montrose, killing Jared Jontě Jacobs.

According to documents, Robinson plowed into a crowd of four to five people, as well as two vehicles, dragging the now deceased victim by his car behind him. All of the victims had reportedly just walked out of the bar around 2 a.m. as it prepared to close for the night.

Jacobs, 25-years-old, died from the injuries sustained from the incident at the hospital. Family and friends reported that Jacobs had recently graduated from Lamar University for nursing and had been working as a registered nurse at Houston Methodist Hospital.

Teanna Macintosh, a witness to the crime, told the Houston Chronicle that the tragedy “came like a hurricane.”

“It just appeared out of nowhere and he just came in and started hitting and running over people and dragging people and tearing up people’s cars. You couldn’t calm him down,” said Macintosh.

“It was just blood everywhere,” additional eyewitness Mrs. Bae told the reporter. “It was so sad.”

“He didn’t know anyone who was fighting,” said Lopez  to KTRK. “We were just talking, and before we knew it, he was under the car.”

“He couldn’t speak to me but he was, I could feel him breathing,” Lopez said. “We decided to go to college, make something of ourselves and we decided to come out and just have fun, you know and then this happened.”

The car involved in the incident belongs to Caltrell Jones. Jones was not in the car with Robinson at the time of the incident.

“He lost his phone in the club,” Jones told ABC13. “He asked a couple people, ‘Have you seen my phone?’ and I guess they didn’t like the way he asked. So, when we left the club, that’s when they approached him, ‘So, what were you saying the club?’ And then they jumped him,” said Jones.

Robinson was taken to the hospital with injuries he sustained in the fight prior to the tragic incident. He is reportedly charged with aggravated assault and murder.