Dear Lil Kim: Given your history with domestic violence, you’re dead wrong for caping for Fabolous

This writer wants to know what Lil Kim was thinking. 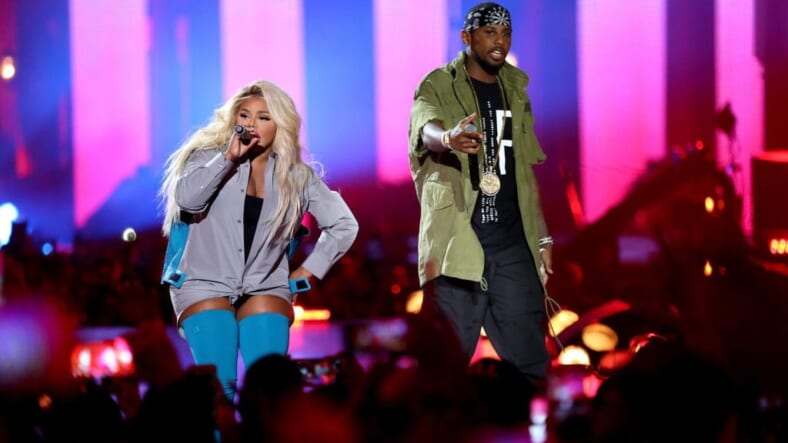 LOS ANGELES, CA - SEPTEMBER 17: Lil' Kim (L) AND Fabolous perform onstage during VH1 Hip Hop Honors: The 90s Game Changers at Paramount Studios on September 17, 2017 in Los Angeles, California. (Photo by Maury Phillips/Getty Images)
Come on, Kim. No baby, what is you doing?
On March 31, Lil Kim invited Fabolous on stage during her show at NYC’s Terminal 5. The performance occurred only hours after video surfaced of the rapper menacing and threatening the mother of his children, Emily Bustamante, and her father.
Filmed on March 28, the video is apparently the continuation of a domestic violence situation between Fabolous (John Jackson) and Bustamante who told police in a statement that on March 7, the rapper punched her seven times in the face causing her to lose her two front teeth.
And just hours later, a female rapper invited him on stage.

The whole thing is problematic. Everyone knew that eventually Fab would be back on stage in New York and I think most people knew that it would be to applause and cheers. The narrative all weekend on Twitter and Facebook was doubt about the allegations.

-WATCH: Fabolous thanks fans after his arrest for assaulting Emily B-

“Fab is too cool for that,” and “What did she do?” were the most common themes. It is important to note that Fabolous has not been convicted of these charges. He was charged with third-degree aggravated assault and third-degree terroristic threats and was released on bail.
Fab and Emily Bustamante have two children together, 10-year-old Johan and two-year-old Jonas, and she has a teenage daughter from a previous relationship who lives in their home. Bustamante was a celebrity stylist for years, and appeared briefly on Love and Hip Hop in its early iterations.
That’s the back story.

The diminutive rap diva filed domestic violence charges against the father of her daughter, Royal Reign in 2015 in custody documents, and requested a permanent restraining order. She later backtracked the allegations and worked toward an amicable solution for their custody dispute.
However, the abuse that Kim suffered at the hands of the Notorious B.I.G. has been documented on several occasions as well as backed up by witnesses. In a 2017 interview, Jermaine Dupri stated that he personally witnessed Biggie pull a gun on Kim to make her record. So why would a woman with a history of abuse, invite a rapper on stage who just a day earlier was seen threatening his partner?

It reminded me of Celie, from The Color Purple. When asked by Harpo what to do about his bossy, mouthy wife Sofia, Celie replied, “Beat her.” Violence was Celie’s everyday life, and she didn’t really see anything wrong with hitting another woman. It took time and personal growth for her to see the error of her ways.

Danger for All Women

The other option here is that Kim doesn’t believe that the violence took place. Like many, she is clinging to the idea that he didn’t do it. There have been no pictures released of Emily’s battered face or with missing teeth, just a video that can be interpreted a number of ways. So, she sided with her friend.
Still, for a woman who has experienced domestic violence to invite even an alleged abuser on stage with her is a bad look. The National Violence Against Women Survey states that 25% of women in the United States suffer from intimate partner violence. That rate is as high as 35% in the Black community. According the Centers for Disease Control, over half of all deaths of women are the result of partner violence. Statistics show that nearly three women a day are killed by an intimate partner.
For Kim, a woman and a documented domestic violence survivor, to bring an alleged abuser on stage with her so soon after his allegations surfaced was recklessness and a betrayal of the worst kind. Kim has, with that one action, cast a shadow of doubt on Emily and all domestic violence accusers.
She has possibly even placed Emily and others like her in greater danger than they were before. That’s because for many men, there is now more of a reason to buy into their own belief that a man they admired, a man in whom they can see themselves, is incapable of committing a horrific crime against his own family.

Kim, this was the worst kind of cosign. It was cruel, and it wasn’t worth it. And like, Ms. Celie, one day you’ll wake up and see that what you thought was right turned out to be dead wrong.

Biba Adams is a Detroit-based hip-hop writer and scholar. Her work has been featured on Revolt, The Root, Ebony Magazine, and more. She was recently named one of AllHipHop’s Powerful Women for her work in founding The Detroit Hip Hop Organization, a non-profit organization dedicated to preserving, promoting, and protecting the legacy of Detroit Hip Hop. Find her on social media @BibatheDiva.