Taylor Swift did What?! 5 Things white people never need to do without permission 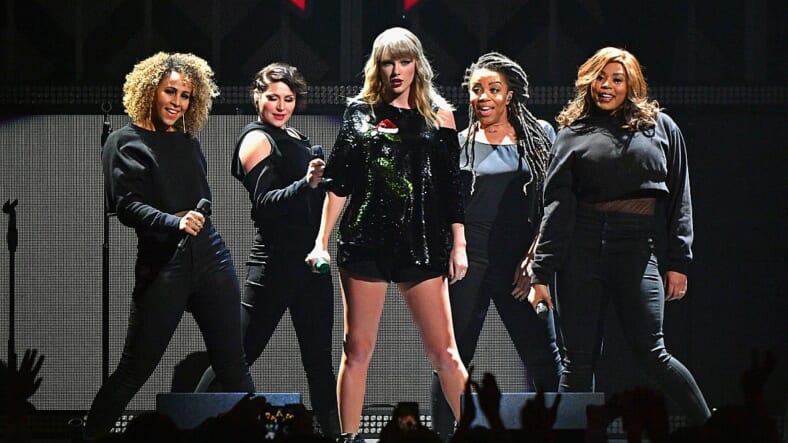 Friday morning, millions of Black Americans woke up to the news that Taylor Swift had somehow found the audacity to curl her lips up to a microphone and dare to sing the melodic iterations of Earth, Wind and Fire.

If you haven’t heard, Swift has released a rendition of the classic hit, “September.”

She took it too far this time.

For those who’ve been living under a rock (or simply don’t know any Black people who like them enough to tell them these types of things) Earth, Wind and Fire is sacred in our community.

You do NOT, under any circumstances, get to invoke the spirit of Maurice White in vain.

To make sure this egregious lapse in judgement never happens again on my watch, here’s a list of five things that white people need to stop doing immediately.

1. Never remake our songs to sound more like you

A few years ago there was this bizarre trend where really waifish white girls and self-impressed hipsters would latch on to a popular hip-hop song and then cover it as a ballad or melancholy ditty.

It was a bit funny and unexpected at first – until it became a thing.

I really need the melanin challenged amongst us to give this up and realize the joke is getting old.

We get it – Black music doesn’t sound the same when reimagined by white people, but it’s time for a new punchline. Or better yet, just make original content and stop capitalizing on the creativity of minorities to get you views on YouTube.

In this age of “Make America Great Again,” and tiki torch wielding extremists, there’s one unexpected place where even white folks from the redest of red states seem to be super comfortable sidling up to Black people.

Granted it’s probably to take notes on everything we’re doing right and then just blatantly disregard it – but I digress.

Seriously, all you have to do is scroll down your Facebook feed and it’s plain to see that white folks are waging an all out war on our beloved side dish.

And before anyone says, “Mac ‘N Cheese is a white dish too” let me point out all of the examples I’ve seen where they’re adding avocados, beef jerky and even blueberries (seriously – BLUEBERRIES!) to this already perfect dinner time staple.

Some things just do not belong together, like blueberries with mac and cheese! Felicia Lawrence is saying BYE to these crazy mixtures!

This one is just odd. Why do ya’ll wanna be pseudo-oppressed so bad?

Let me tell you something, if my currently “hella Black” self had been born white, I’d be a great ally and help marginalized people whenever possible. Then I’d take my alabaster ass home and fully enjoy every, single, got damn privilege my whiteness could afford me (while still speaking up on behalf of my homies).

What I wouldn’t be doing is ignoring mountains of data on the impacts of systemic oppression, just so I could go online and whine, “Me too! White people experience racism too! Haven’t you heard about Irish slaves?”

You can play Oppression Olympics all you want – I’m still not handing out any medals.

Years from now when someone does a “retro look” of what the 2010s were like, it will probably be fashioned after a Kardashian or an Instagram model doing her darnedest to look like one.

Whether some of us want to admit it or not, they dominated much of the last decade, globally.

And they built this massive empire all on the strength of knowing which Black men to sleep with and which Black women to imitate.

With that said, if I was a random Becky (where are my manners – Rebecca) in middle America trying to get “put on” in this world, I might be tempted to slap some $500 cornrow extensions in my hair and hit up the local basketball court looking for a rich boyfriend too.

Here’s the thing – Black womanhood isn’t a trend you can just slip on like a mink coat whenever you want some extra attention.

Ladies – please let go of the need to reincarnate yourself as a “sister” and just accept that you’re not a Kardashian. And given the constant waves of public heartache each member of that family has experienced during even life’s most precious moments, that might be a good thing.

Count yourself lucky and go figure out how to be the best white woman you can be.

I believe in you, Rebecca.

5. Never use trendy urban slang in a way that’s not ironic

Every year white America goes scrolling through The Shade Room’s timeline to identify a handful of slang words popularized by the Black community and then use them until they are run into the ground.

All you gotta do is hear Bob from Accounting says he’s “woke” without any sense of irony – one good time – to realize why this must be stopped.

And then your Black friend, who truly thought you were one of the good ones, has to go through the emotional task of determining whether or not you’re that white friend who he/she can’t afford to be seen with socially.

If you want to ever stand a chance of being “invited to the barbecue,” then immediately start talking like your regular self. It’s a lot easier for us to trust that you’re a true ally when you aren’t lowkey mocking our vernacular straight to our faces.

Ok. I think that sums up the basics.