Fraternity brothers around the country are rallying around Rashon Nelson after a video of his arrest at a Philadelphia Starbucks made headlines.

Nelson is a member of the Alpha Eta chapter of Omega Psi Phi fraternity and attended Bloomsburg University in Pennsylvania as a finance major from 2013-2017. 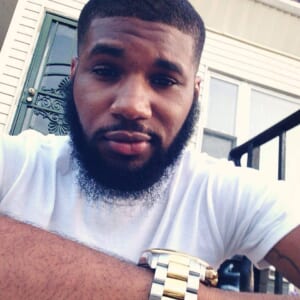 Nelson and his business partner were waiting to meet a colleague at Starbucks when police were called.

Just as the friend of the two men arrived, the men were put in handcuffs and arrested by police.

Philly.com shared a second video, apparently taken minutes earlier and leading up to the arrests, that shows a group of Philadelphia police officers speaking to the two young men.

Alan Yaffe, a white man, enters the frame and questions why the police are standing over the men. One officer says they are “trespassing,” and adds they had been asked to leave.

“Why would they be asked to leave?” Yaffe asked, adding that the men were waiting for him. “I wanted to get coffee for two Black guys sitting and meeting with me,” he told the officer. “Does anybody else think this is ridiculous?” he asked other patrons in the shop. A woman agrees.

–Black teen sentenced to 65 years in prison after cop kills his best friend?–

“It’s absolute discrimination,” Yaffe added. He says he and the men can go elsewhere to meet. An officer says it’s too late for that, because the two sitting men had previously declined to leave. The video ends as the officers arrest the men and leading them out of the coffee shop.

The fiery backlash on social media was swift with people calling for the popular coffee chain to address this incident using the hashtag #boycottstarbucks and demands that the Starbucks manager who called the police be fired immediately.

According to Philly.com, the manager in question has left the company in what a company spokeswoman called a “mutual” decision.

In the wake of the incident members of Omega Psi Phi have been posting their support for Rashon Nelson on social media.

A message from the 40th Grand Basileus @TonyKnox40thGB regarding our Brother and his unpleasant experience in @Starbucks pic.twitter.com/yjKcz129WE

Giving Honor to God and my Lord and Savior Jesus Christ.

The times that we are living in continue to unveil the bold and dark side of racism through the lens of ready cameras of witnesses that record the injustices that are reported daily. The latest incident on the news around the world touched our Omega family as one of the young en arrested at the Starbucks in Philadelphia, Pennsylvania is an Omega Man and remarkable example of resilient courage in the face of undeserved fire. I thank God for his sense of presence and calm because the encounter with police officers could have been very different. While we won’t yet releases names, please know that this Basileus and Chapter Brothers have been in touch. Rev. Dr. Martin Luther King, Jr., said, “Now is the time to lift our nation from the quicksand of racial injustice to the solid rock of brotherhood.” Brothers, I say to you fifty-five years later that now is the Time! This was very clearly racial injustice but maybe this case will be the catalyst to create the positive change that we seek. When people of all diversities, ethnicities and cultures stand to speak out, the world takes notice. There were others in Starbucks that boldly stood up to speak against the actions taken by police and management. The CEO of Starbucks has made a public apology and I applaud his sincerity but the change within his company must include the training of management and employees on the correct procedures to embrace and understand diversity and continuously act accordingly. This will determine if Starbucks gets this right.

My Brothers, let’s continue to lift as we climb to show this world how good it will be when we all turn to the solid rock of brotherhood and mankind! WE ARE ONE!

TheGrio also reached out to fellow Omega Psi Phi brother, comedian and host of the Rickey Smiley Morning Show, Rickey Smiley, to find out, if given the opportunity, what message he would tell the Nelson about moving past this situation.

“If I could speak to him right now, I would congratulate him on using discretion. He did it the right way. He was calm and reminded me of when people like Dr. King were arrested back in the Civil Rights movement,” said Smiley.

“There is also a lesson to be learned here. Stay silent first and then fight later in court because these people need to be held accountable in what they do and the way they treat people.”

Several police officers came in there and surrounded these young Black men and somebody has to pay for that. I would also encourage my frat brother to sue the Philadelphia police department because I think they over reacted. They are just as much to blame as the manager who called the police. That person should be fired and not just moved to another store. It should be added to that person’s employment record that they were fired because of racial profiling.”