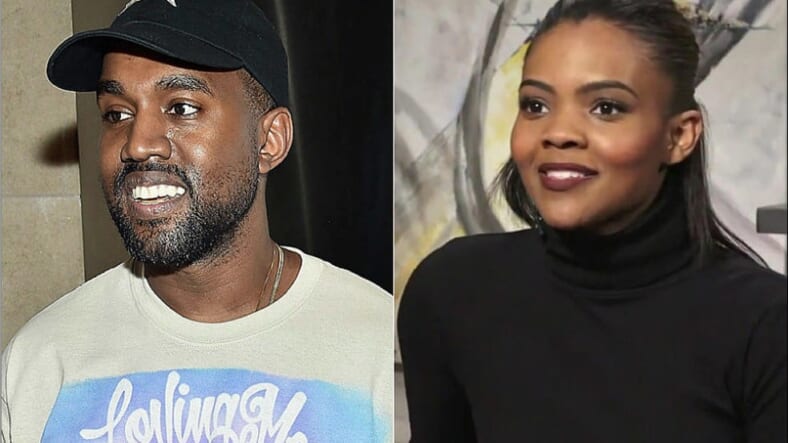 Kanye’s been offline for several months and now he’s back with a vengeance and oozing his mental eccentricity all over social media.

The sad thing is Yeezy still seems to be in the sunken place. He tweeted out support for Candace Owens, a staunch conservative and vocal Black Lives Matter opponent.

He tweeted on Saturday:

“I love the way Candace Owens thinks… ‘Be fearless. Express what you feel not what you’ve been programmed to think.’ ” He then said “get passed the past. The more people contribute to real-time global consciousness the faster we evolve.”

Swim In A Stream of Consciousness

West has been tweeting overtime, but this time he may have it all wrong since Owens is the equivalent of a Black Tomi Lahren who has called Black Lives Matter protesters “whiny toddlers.” She also has gone against the grain on issues surrounding Colin Kaepernick and even called Jay-Z a fraud for taking a stand against ongoing mass incarnation issues in his Peabody Award winning Kalief Browder documentary.

So is that the type of anti-black thinking West likes? It figures. We still haven’t forgotten that West took a meeting with Trump.

On her part, Owens seems pretty happy West gave her props online and even begged for a chance for the two to meet.

“I’m freaking out. @kanyewest ….please take a meeting with me. I tell every single person that everything that I have been inspired to do, was written in your music.

I am my own biggest fan, because you made it okay. I need you to help wake up the black community.”

West’s timeline has been an outlet for musings this past week. While some of his tweets are pretty clear, guiding his followers in an empowering direction:

“Don’t follow crowds. Follow the innate feelings inside of you. Do what you feel not what you think. Thoughts have been placed in our heads to make everyone assimilate. Follow what you feel.”

Others leave us scratching our heads in confusion.

“You will be a drop of water with the ocean as your army. If you move out of fear than your on your own. Then it’s just you and the money and the countless people you have to lie to and manipulate to build a man made path that will never lead to true happiness.”

I don’t subscribe the term and concept of God fearing. That’s a dated mentality that was used to control people. We are in the future. If God is love and love it’s the opposite of fear then…??‍♂️ to fear God makes no sense ?‍♂️?‍♂️?‍♂️?‍♂️?‍♂️

Dude, you lost us.

“I think it’s similar to, like, ‘socially conscious’ Ye—‘message’ Ye,” he said on the Brilliant Idiots podcast.