His essay in Time Magazine's annual “100 Most Influential People List” was cute, but what about us? 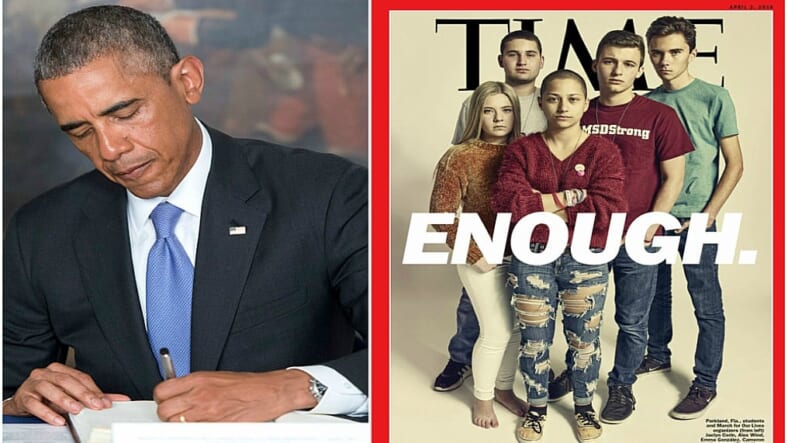 Last week, Time Magazine released their annual “100 Most Influential People List” with #MeToo founder Tarana Burke and Tiffany Haddish landing on two of the six coveted covers. Unfortunately, as excited as I was to see them receive this enormous honor, I couldn’t help but be taken aback by the coverline right below Haddish’s name, which simply read:

On the surface this looks amazing. I remember watching the former President cry during his press conference discussing the Sandy Hook mass shooting that took the lives of 20, mostly six and seven-year old children, in 2012. Now, penning  a tribute to affirm the survivors of the shooting at Marjory Stoneman Douglas high school (specifically Cameron Kasky, Jaclyn Corin, David Hogg, Emma González and Alex Wind) who have made gun control a national movement only seemed right and appropriate.

In no way am I negating their efforts, but I was also there to watch former President Obama’s lack of support for the Black children in Ferguson, Baltimore, Chicago, Detroit, New Orleans, Houston, and other urban cities, who have been fighting for years for someone to care about gun control in their communities. I watched him take the side of law enforcement time and time again as Black and brown bodies continued to be killed by police—hashtag after hashtag and nothing coming from his mouth or penned from his desk.

Actually, something did actually come from his mouth in 2016 after the police shooting deaths of Alton Sterling and Philando Castile when he stated:

“So, you know, when people say Black lives matter, that doesn’t mean blue lives don’t matter. It just means all lives matter but right now, the big concern is the fact that the data shows Black folks are more vulnerable to these kinds of incidents.

This isn’t a matter of us comparing the value of lives. This is recognizing that there’s a particular burden that is being placed on a group of our fellow citizens and we should care about that. And we can’t dismiss it.”

When Dr. Martin Luther King, Jr.  stated that “riot is the language of the unheard,” he was talking about us. He was talking about Ferguson, Baltimore, Chicago, and anytime Black rage has taken to the streets. When the Parkland students spoke out, they were greeted with celebrity endorsements, money, magazine covers, press junkets, and millions of followers. They have been able to share their stories and people are actually starting to listen. When Black activists like Darren Seals and Edward Crawford stood up in Ferguson, years later, they ended up dead under mysterious circumstances only so to young lives to be silenced forever.

Obama has gotten this wrong and will likely continue to get this wrong as long as he and many others, receive the Parkland movement as “acceptable,” while questioning the intentions of whether of not those fighting for Black lives are doing it the right way.

In his Time 100 message about the Parkland students, Obama wrote:

“This time, something different is happening. This time, our children are calling us to account.”

I have to wonder exactly what the f**k did he think we have been doing all this time? Every moment we met him and his team at the White House and every time we protested, marched, and interrupted candidate after candidate, simply trying to be heard. Accountability is not only acceptable if it assimilates to respectability politics—which, by the way, HAS NOT SAVED A SOUL in the 400 years we have been in this country.

Despite a quick mention of Black Lives Matter in his essay, Obama’s decision to speak so highly of the Parkland activists is a slap in the face of every hashtagged name or movement he refused to talk about from his podium as the head of the white empire. His silence spoke volumes then and his voice now serves as a reminder that all skin folk ain’t always kinfolk.