REVIEW: The depth of Rachel Dolezal’s delusions are on full display in ‘The Rachel Divide’ on Netflix

The highly-anticipated doc sheds a light on how the transracial princess and her children have been affected by the controversy she created. 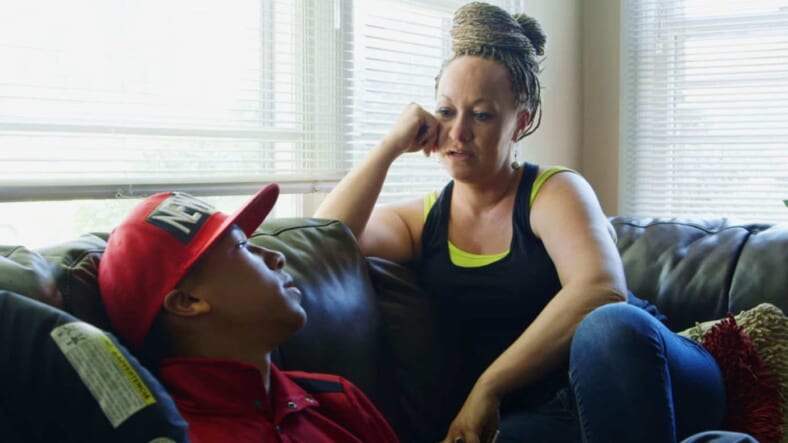 It has been three years since Rachel Dolezal became a household name and sparked outrage, confusion and resentment across the nation when the world learned she was a white woman representing herself as a Black woman.

Even worst, she was leading the Spokane chapter of the NAACP. It’s no surprise then that Netflix’s documentary, The Rachel Divide, has already drawn tons of backlash weeks before its April 27 premiere date.

One hour and forty minutes is not nearly enough time to unpack the loaded questions or to dissect their implications. It is however, enough time to make one thing clear: Rachel’s story is not simply black and white. She exists in a permanently gray area that she may never escape.

Even after spending two years inside Dolezal’s world, the documentary’s director, Laura Brownson, remains conflicted about her subject.

“With Rachel, I care deeply about her kids but there are things about her that are perplexing to me and the deeper I dig into her as a character, the more confused I have become,” she told TheGrio in an exclusive interview. “It is a tricky thing for sure.”

“Tricky” doesn’t begin to describe the complexity of Dolezal’s assertions, to the loaded questions her story raises. As someone who reviews movies, music, and all things entertainment related for a living, even I was frustrated by an inability to decide how I felt about this polarizing figure and had trouble discerning legitimate facts from the river of white tears Dolezal spews every chance she gets.

READ MORE: ‘Southern Charm’ couple, Tamica Lee and Barry Smith, lift the veil on what it takes to have a “perfect” marriage

Is she malicious? Confused? Mentally ill? Emotionally scarred to an insurmountable degree? What were her motives? What was her end game? Why was she outed by her parents and the local news station?

The film doesn’t serve up those answers in a pretty package. It is not an apologist report that attempts to justify her actions and the team behind it was committed to preventing Dolezal from using the documentary as another national platform for her unique brand of bullsh*t. She wasn’t paid a dime for participating in the project and Netflix has gone a step further to protect its integrity by refusing to include her in the usual publicity tour. Instead, the documentary shines light on details that got lost in the sauce amid the 2015 controversy caused by her outing and reveals how deeply her children have been affected by her actions.

“This film has no agenda,” adds Brownson. “We are not trying to dictate how people feel about Rachel or even the film. There are many places where we are presenting both sides and really allowing people to come to their own conclusions.”

When Dolezal first appears in the documentary, she’s braiding her own hair, her fast-moving fingers adding kinky blonde extensions with the precision of the most seasoned stylist.

“It feels like I’ve had this trial by the public and the jury is still out on who Rachel Dolezal is, whether she’s a good person or a bad person, Black or white,” she says.

To be clear, the jury is not out on whether she is Black or white. She’s white. Period. No amount of tanner, hair extensions or research can change that. Similar to the intricacies in the details that decide whether someone who caused the death of another amounts to murder or involuntary manslaughter; the issue is intent. No matter the intent, the result is a dead body, but the measure of the punishment that fits the crime rests solely on the reasons behind it.

According to Dolezal, she identified with stories and descriptions of Black pain as a child long before she adopted our aesthetic as an adult. The abuse, ridicule, oppression of Black folks is what she was drawn to above all else. If you believe her side of things, she used our history as escapism. She created a fantasy world where her pain was justified by an uncontrollable, powerful force because that would be easier to manage than the truth that her oppressors were her religious extremist parents. Dolezal contends she was made to feel “wrong from the start,” a sentiment many Black folks can identify with.

For all of the endless amounts of facts she has collected about Blackness, Dolezal is immune to her own white privilege. She’s blind to the privilege that allowed her to “become Black.” That choice, the option that escapes those of us born into the oppression that she so desperately wishes she experienced.

After all of the backlash, all of the interviews, all of the jokes made at her expense, Dolezal is still not clear about the answer to one permeating question: “Who’s the gatekeeper for Blackness? Who can protect it? Define it? Own it?”

Ummm…not you Rachel. That’s for sure.

The Kids Are Not Alright

While viewers will be frustrated and likely shocked by Dolezal’s inability to grip reality, no one has been more affected by her delusions than her children.

The unexpected stars of the documentary are her biological son, Franklin Dolezal, along with Izaiah and Esther Dolezal, two of the four Black children her parents adopted after being called to “save babies from abortion” and deciding Black kids would be cheaper and easier to get than white ones. Izaiah and Esther found themselves in Rachel’s care after she “rescued” them from their parents’ weird, white-washed world.

According to Brownson, the kids and their stories serve as the “moral compass” of the film and help illuminate previously dismissed facts of this twisted tale.

Franklin walks the line between feeling protective of his mother and her honor and being frustrated, hurt, and angry at her choices.

“All my mom did is say that she’s black and people started losing their minds. She has done a lot for the community and people don’t care to recognize that. They just say she’s a liar. All they say is she’s a liar but all that stuff she has done is nothing compared to all this. I can hear her crying in her sleep at night,” says Franklin.

Brownson insists Franklin is not as depressed as he seems in the film’s first trailer.

“His life has been put into massive turmoil that most kids don’t have to go through. On that particular day he was frustrated with everything and wanted it all to go away, including my film. That said, I sent two years filming him and there were days I couldn’t get him away from the camera. That was more often the case than not. He’s a lovely kid,” says Brownson.

“I would not characterize him as depressed. He’s a teenager who has typical teenager tendencies and I think theres no doubt he has been through something most kids have not had to endure but I wouldn’t characterize him as depressed. I think it had an impact, but he doesn’t seem depressed. I think he realizes as do the other kids that in some ways, they are the shining stars of the film. Franklin was able to see that when he saw the film. He was 13 when we started this project and now he is 17. He looks different. Ultimately, he’s supportive of the film and of Rachel. He loves his mother.”

Esther and Izaiah are on #TeamRachel. Throughout the film, they describe the atrocities they experiences growing up and are empathetic to Dolezal’s plight. They see her as the great savior who rescued them from their abusive household. This has to be the reason why they are so willing to accept Dolezal’s assertion that her outward assimilation had a lot to do with making Izaiah feel as comfortable as possible when she started raising him as her own son.

Esther shows the scars left on her body from her parents’ idea of discipline which often included spanking with glue sticks and baboon whips.

“They show the whip marks,” says the film’s producer, Roger Ross Williams. “It’s obvious when you talk to them that they have trauma in their lives and that something you cant fake and you cant hide. They have trauma and it came from somewhere.”

Esther’s abuse didn’t stop with her adoptive parents. Both Esther and Rachel believe the public shaming was a tactic used by their parents to silence them and prohibit them from proceeding with a criminal case against Rachel’s biological brother, Josh Dolezal, who was accused of molesting both girls. They are convinced the public thrashing was meant to poke holes in Rachel’s credibility as a witness against her brother. If that is true, mission was accomplished as the case was rejected after the story made headlines when a local news reporter cornered Rachel on-camera and asked her if she was indeed African-American. That reporter was admittedly tipped off by a private investigator who was hired (presumably by her parents) to dig up dirt that could discredit her testimony.

As believable as Esther and Izaiah seem to be, viewers are forced to make another judgment call when they consider that the other two members of the Dolezal house of horrors (Zach and Ezra) chose not to participate in the film. They have shown their support for their adoptive parents and insist Esther and Zach have been brainwashed by Rachel and deny all of the abuse claims.

“When you’re in an abusive situation, it’s really hard to get out of that and not everyone escapes,” explains Williams. “I think the other two siblings, we don’t know their situations or their mental state or if they were able to escape the way Izaiah and Esther and Rachel did. It’s very difficult to break away.”

Like Wiliams, Brownson believes Esther and Izaiah’s stories of abuse.

“I find Izaiah to be one of the most earnest, thoughtful, human beings and less is more with him. He doesn’t offer tons of details but every word he says feels like it has a ton of meaning and is very genuine,” she says. “It was important to me that they be given the opportunity to speak his truth and be empowered to speak their truth. I couldn’t tell the story accurately without including her kids and they were all willing participants. They all felt empowered to speak their truth and it was uncensored. Rachel did not tell those children what they could and could not say. It’s up to people how credible they find Izaiah and Esther to be in their accounts of what happened to them as children.”

It’s also up to viewers to decide if they believe anything Rachel Dolezal (who wants to change her name to Nkeche Amare Diallo) has to say. The core of her character is not illuminated in this film, but the depth of her delusion is on full display.

The Rachel Divide premieres on Netflix on April 27.