The mom-to-be canceled several upcoming shows due to her growing baby bump. 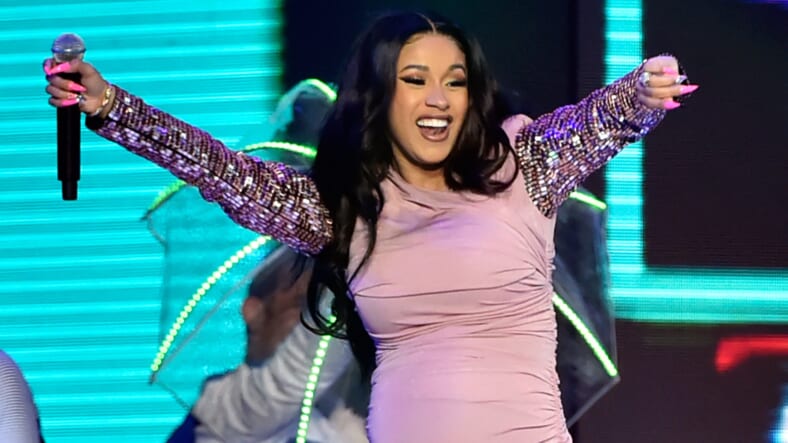 Cardi B and her unstoppable climb to the top may be taking a bit detoured thanks to a new lawsuit.

The “Bodak Yellow” rapper is being sued by her former manager, Shaft, who claims she owes him big bucks for her major successes in the music industry.

According to reports, Klenord Raphael, aka Shaft, claims he discovered Cardi B in 2015 and facilitated her relationship with Vh1, the network that put her on Love & Hip Hop New York.

He ‘s also claiming that he and his team of writers and producers were behind her hit single, “Bodak Yellow” and he wants Belkalis Almanzar (Cardi) to pay him his due coins now that the work he claims he put in helped her secure serious cash. He’s asking for $10 million.

Aside from wanting to be paid for his services, Shaft says he was defamed by Cardi B and threatened by her fiancee, Offset. Shaft reportedly received a threatening text from the Migos frontman last December saying, “[U] better stop play acting like u don’t know u taking her sh** from her u a snake. U can’t hide from me N**** and u not bout to play my WIFE.”

Shaft believes Cardi B’s publicist/makeup artist is behind their fallout and had poisoned the expectant mom against him.

“Since discovering Cardi B in 2015, Shaft has played an integral role in developing her music career and public image. While he is proud of their successful collaborations as she evolved from Instagram influencer to music megastar, Shaft is disappointed by her actions to freeze him out of her career, which are detailed in the complaint,” Shaft’s rep told TMZ.

“Shaft is confident that his lawsuit will validate his conduct and substantiate his legal claims.”

So far, Cardi B has yet to issue a response, but we’re guessing she’ll have some choice words for her new adversary. In the meantime, she seems to be switching gears and focusing on her upcoming project, her first baby.

On Thursday, she tool to social media to announce that she will be cancelling several upcoming shows due to her growing bump. “Shawty keep growin’,” she said in an Instagram video. “I be looking like I be moving and everything but in reality, a bitch barely can breathe!”