Mom outraged after Black student busted in the head by police for skateboarding ‘He hurt me, Mom’ 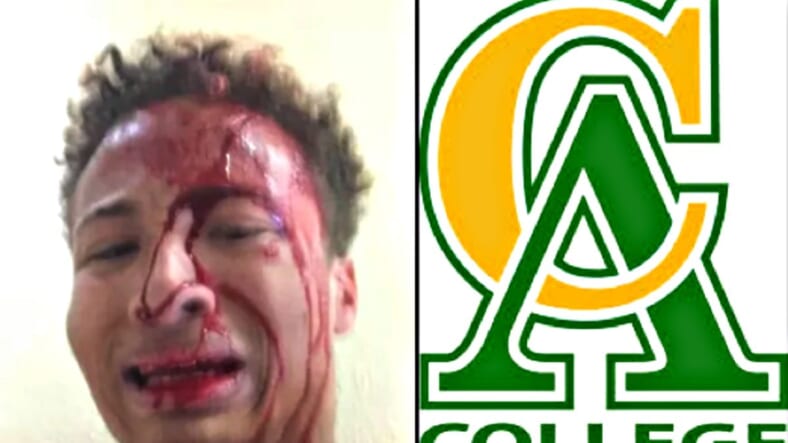 Skateboarding is a white boy’s guilty pleasure of choice. But when it comes to a Black kid skateboarding at Central Arizona College, the skateboard is apparently viewed as a weapon and not a toy for a boy who just wants to have some fun.

A Black college sophomore at the school got his head busted to the white meat by a campus cop, after a resident assistant told him that skateboarding in the dorm hallway was threatening the lives of others, reports The Root.

Kai Triggs’ mom reportedly posted a bloody picture of a wound on her son’s head after he was allegedly attacked by campus police officers. Triggs’ took to social media to explain what happened to her son and once again it’s another ridiculous story about cops being called on a black kid for no good reason.

Triggs said her son was skateboarding in his college dormitory – nothing outrageous for a sophomore college kid who likes to have fun like young boys tend to do.

He said the R.A. who is in charge of overseeing the students on the door floors, told her son that he was “threatening the lives of others by skateboarding in the dormitory hallway.”

But anyway, Triggs actually stopped skateboarding and went to lock up his board in his dorm room. But that pissed off the R.A who told him to give it up. Triggs, who clearly had every right to, refused to give the disgruntled R.A. his skateboard.

The R.A. called over a campus cop and the rest is the latest edition to the list of “everyday things black people can’t do without getting the cops called on them.”

The Root outlines the gruesome details of happened next. The mom says her son showed the cop Officer G. Terry, his empty hands – because you know, Blacks folks are really trying to not get killed and later blamed for having a gun.

The officer then grabbed her son’s hands and “twisted it behind his back and then his left and held them with one hand,” said explained. What ensued was a brutal beat down.

“[T]he cop then used his other hand to SMASH my son’s head into the brick wall and down to the floor… My son lost consciousness… he woke up on the floor covered in blood and tried to start video on his phone, there was too much blood to swipe to video and the phone could only snap the photo above … the one where he is crying. He was screaming to me that his head was split open and saying he didn’t want to get killed, asking the first cop, Officer Terry, to please step back from him. …

“At this point the second cop showed up, he’s black, and called an ambulance… the cop who assaulted him took my son’s phone, I asked what was going on and why this was happening and I said, “Please don’t kill my son” I told them he has anxiety attacks and has pills in his room that will help calm him. The cop hung up or dropped the phone. … All I could hear was my child screaming for me … line went dead. I called back 4 times before my son answered, he was with paramedics, she got on the phone and told me to meet her at the hospital.”

Triggs said her son got eight stiches. He was not arrested or charged and is trying to come to grips with what happened to him.

“Why did he do that to me mom? I cooperated. They said if you just give them your hands and cooperate they won’t hurt you. He hurt me, Mom,” Triggs said recalling what her son said to her.

Central Arizona College said they are reviewing the video and gave Triggs the explanation for the campus police officer’s assault against her son saying he “came toward” the officer.

Triggs said the police have yet to give her an incident report and they haven’t released the video yet. But when she posted about the incident on social media, the Central Arizona College Police Department took the time to call her and ask her to remove the post because they were inundated with calls, saying they were: “receiving too many phone calls to be able to work the case.”