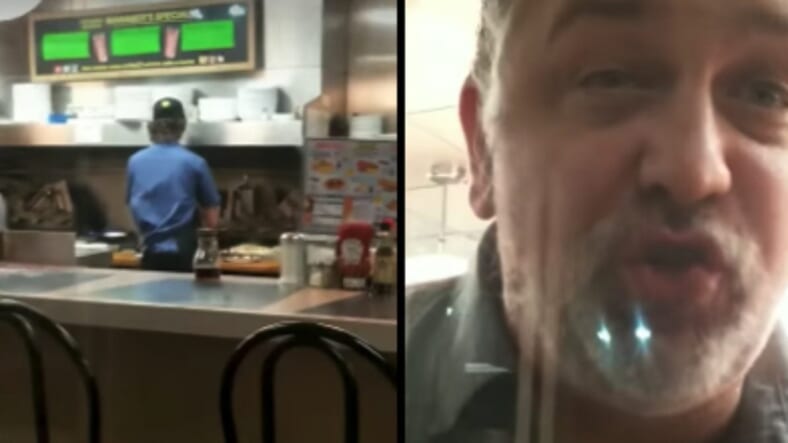 Another Waffle House in Alabama is under fire after a black woman says the restaurant locked its doors and refused to let her in to eat.

The Pinson, Alabama, restaurant is under investigation for racial discrimination after Jacinda Mitchell posted a video of the restaurant with the doors locked. Inside, a number of white people can be seen eating, and the cook is still active on the grill.

This latest incident comes just days after a Black woman was slammed to the floor by white police officers at a different Waffle House in Mobile, Alabama and a white man shot up a Waffle House in Tennessee. The shooter was taken down by James Shaw Jr., who has been hailed for his heroic act.

On the video taken by Jacinda Mitchell, you can see a man come to the window and say a few choice words to Mitchell as she filmed the incident. It looks like he’s threatening to shoot her. Mitchell said he did threaten her.

Mitchell said while she doesn’t plan to sue, she wants to bring to light how she was discriminated against.

“I initially record just to show corporate about the doors being locked. I don’t need a lawsuit…. just needs to be brought to the public attention.”

—‘My Fault, Yo’: Chance the Rapper apologizes for his ill-timed Kanye support—

Pat Warner, director of public relations and external affairs for Waffle House, released this statement which admits that the doors should not have been locked:

“We have launched an investigation to gather all of the facts,” Warner said. “Waffle House is a welcoming place for everyone, and we are fortunate to enjoy a very diverse and loyal customer base who we do our best to serve every day. The employee involved should not have locked the front door at all and should have certainly opened the door for the customer when she arrived. We will get the facts and take appropriate action quickly.”

Check out the video for yourself.