#FlyingWhileBlack: Actress blasts white woman for asking her to clean up her mess on airplane 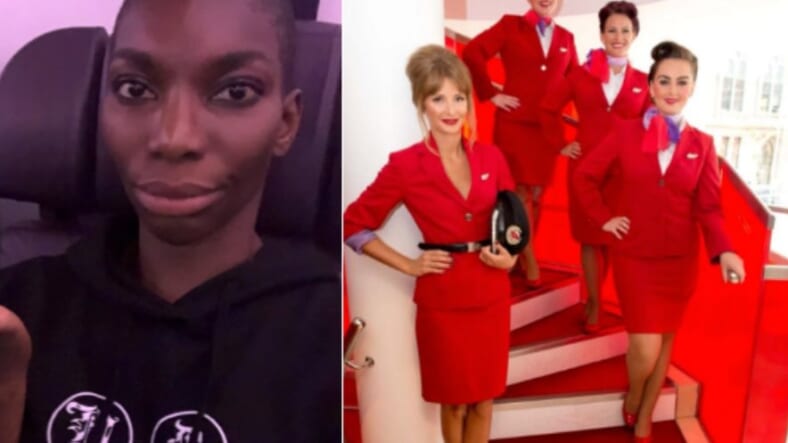 To Virgin Atlantic passengers, apparently all Black people look like the help.

Black Mirror actress Michaela Coel just posted a pic on Twitter that has gained traction after she said a passenger mistook her for a flight attendant. The problem is that Virgin Flight attendants wear bright red outfits that are hard to miss, and Coel was in plain black clothing and hardly looked the part.

—VIDEO: Willow Smith shares painful confession with mom Jada ‘I was in this black hole and I was cutting myself’—

“Congratulations to Virgin Atlantic passengers once again! A lady just confused me for a hostess and asked me to clean up her mess and increase the flight temp. What I’m wearing… what the staff are wearing.”

Congratulations to Virgin Atlantic passengers once again!
A lady just confused me for a hostess and asked me to clean up her mess and increase the flight temp.
What I’m wearing… what the staff are wearing. pic.twitter.com/MXcQr6tQDs

And, of course, Black Twitter had a field day with replies with many people implying that the woman was being deliberate:

drag her!!! she knew what she was doing, her way of asserting power (whether consciously or subconsciously) pic.twitter.com/7qH6eJ9Zse

it could not be more obvious that you don’t work there & are a passenger. this person has transcended confused and crossed into the realm of foolishness

Sadly, this is a recurring humiliation for Michaela Cole who wrote in Vogue in January that she had an issue traveling with Virgin Atlantic when she was getting ready to go into the upper class section.

She said a white woman sped by her, likely in disbelief that she and two Black men were ahead of her in line.

Michaela Cole said once the woman realized the error of her ways and then turned around to go to the back of the line where she belonged.

“I arrive at boarding: Economy on the left, Upper Class beside it in the corner. I join the Upper Class queue behind two well-dressed black men. Half a minute later, a white woman speed-walks past me and the two guys, into the wall. “Where’s th…?” She blinks, gives a look somewhere between embarrassed and apologetic, then U-turns and joins the back of the queue.
It’s… whatever. Until I start wondering what she expected to find between the queue I’m in and, well, a wall. I turn to her, smile. “Is it your first time flying Upper Class with Virgin?”

“To suggest things may be going on in our brains that we aren’t fully conscious of, that we unknowingly make classist, sexist and racist presumptions… well, there just aren’t many comfortable ways to take that”

No word of if Michaela Cole has talked to Virgin Atlantic about the matter.