It was lit: 8 unforgettable moments of the Blackest royal wedding ever 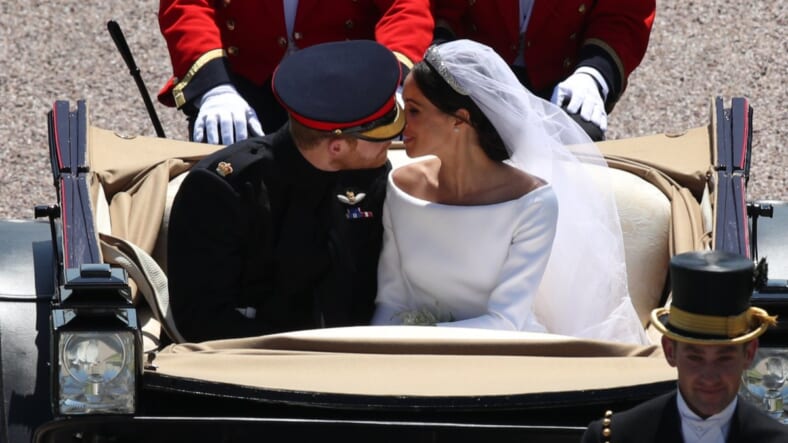 They’re married now! Meghan Markle and Prince Harry are officially The Duke and Duchess of Sussex. We’ve been eagerly awaiting these nuptials and cheering this couple on from across the pond. Meghan is truly the definition of game changer: she’s 36 (three years Harry’s senior), she’s divorced, she wasn’t sitting around waiting to “get chose” (she had a thriving career as an actress on an award-winning television show before they met, and, oh yeah, (wait for it…) she’s Black. And in keeping with doing it Meghan’s way, the couple’s wedding did not fail to deliver that special flava all up and through our cousin’s internationally-celebrated nuptials. In the profound words of Puff, “Take that, take that.” Here are the moments from The Royal Wedding we’ll all be talking about for years to come.

Our Kinda People
As the sea of guests made their way into St. George’s Chapel, we anxiously scanned the crowd for brown faces we recognized. Oprah Winfrey, newlywed Serena Williams, Meghan’s former Suits co-star Gina Torres, Idris and fiancee Sabrina (who along with Auntie Oprah arrived early) were in attendance and did not disappoint in their Sunday’s Best. We were especially impressed with Serena’s asymmetrical neckline Versace dress, matching fascinator, Bulgari statement necklace and below the waist cornrows.

There’s a Preacher in the House
Bishop Michael Curry did not come to play. The charismatic pastor, who centered his sermon around the power of love, referenced Martin Luther King, Jr., slavery in the Antebellum American South and the Balm in Gilead in front of every British royal alive. Let that sink in. He made guests laugh and he also forced them to think. In short, he gave the world a sample of an authentic African American church service. Oh and The Queen was mesmerized.

Gimme That Ole Time Religion
There’s singing and then there’s sangin’. What took place at the royal wedding was definitely the latter. The Kingdom Choir led by Karen Gibson performed Stand By Me—the 1961 classic by Ben E. King—in perfect pitch, with a little Kirk Franklin-styled soul flair, and wowed everyone with their pink and blue pastel ensembles, dramatic choir director and even a little bit of choreography because that’s what our gospel choirs do best. The dynamic vocalists also delivered Amen (This Little Light of Mine) by Etta James as the couple exited the chapel.

When a Man Loves a Woman
The love and passion Harry has for his bride was palpable throughout the ceremony. From the bearded groom mouthing “You look amazing. I am so lucky” to Meghan as she joined him at the altar to him staring at her while biting his bottom lip (Aye!) to the loving way he held and stroked Meghan’s hand, at times it felt like there was no one else in the room but Meghan and Harry. And isn’t that the way it should be?

Meghan’s Mama is a Bawse
Doris Ragland walked into that chapel full of British wealth and royalty with her neatly coiffed locs, her nose ring, her tailored green ensemble and coordinating cream hat and her head held high—by herself. One gets the feeling she would not have been any more herself if she were at a storefront church in South Central Los Angeles. The mother of the bride exuded the type of confidence with her quiet yet powerful presence that words will never be able to describe.

Cello, anyone?
After the service, social media was buzzing about 19 year-old cello player Sheku Kanneh-Mason, the 19-year-old winner of 2016’s BBC Young Musician competition. The gifted cellist eloquently played while the couple handled the official wedding business of signing the register. The talented teen expressed that he was “bowled over” when Ms. Markle called to ask if he would play during the ceremony. “Of course I immediately said yes!” Sheku has already been given the nickname cello bae. Gotta love Black Twitter.

To Heck with Tradition
Following news that her father could no longer attend due to health complications, speculation swarmed about who would walk Meghan down the aisle and “give her away.” Breathtaking in a timeless Givenchy gown and 16-foot veil, the bride was escorted by her new father-in-law Prince Charles halfway down the aisle. However she opted to strut solo for the remaining part. What a modern way to begin her new journey and show the U.K. there’s a new Duchess in town.

The Marriage > The Wedding
Of course there was still a healthy dose of pageantry woven into the royal wedding and honestly we were looking forward to some of it. But it was mighty refreshing to feel that this event was first and foremost about two people who genuinely love each other joining their lives together and (at least attempting to) stick it out for the long haul. Words like these far outweighed the pomp and circumstance of the day: “No one should enter into marriage lightly or selfishly.” Amen.