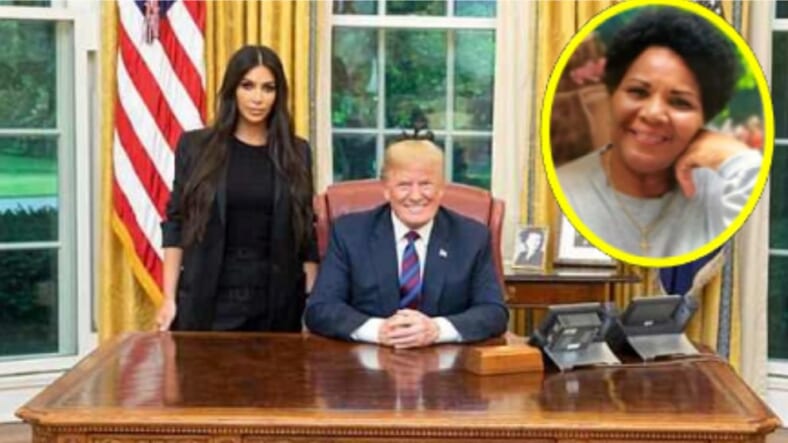 The 63-year old grandmother has already served 21 years of a life sentence after being convicted on charges of conspiracy to possess cocaine and attempted possession of cocaine. Johnson, a first-time non-violent drug offender, was pardoned a week after Kim Kardashian pleaded her case with Trump.

Last Wednesday, Kardashian found herself in the midst of a media storm as reports circulated that she was meeting with President Trump at the White House to discuss prison reform and to campaign for the release of Johnson.

Here’s what you need to know about Alice Marie Johnson and her case:

Johnson got mixed up in drug trafficking following a particularly rough period in her life. She lost her job at FedEx where she had worked for 10 years (due to a gambling addiction), got divorced, and then her youngest son died in a motorcycle accident.

This traumatic series of events is what led her to become involved with drugs.

As she told Mic: “I felt like a failure… I went into a complete panic and out of desperation, I made one of the worst decisions of my life to make some quick money. I became involved in a drug conspiracy.”

Michael Scholl, the attorney who filed the latest court documents appealing for Johnson’s sentence reduction, maintains she was never the leader of the cocaine operation.

According to Bustle, “Johnson gradually became involved in a drug trafficking operation in Memphis, Tennessee. She says that she never brokered any deals or handled drugs, but was responsible for relaying coded messages over the phone.”

2. This was her first offense

One of the most stunning things about this case is that even though her 1993 arrest was her first offense she was given a life sentence without the chance of parole.

The 63-year-old great-grandmother was convicted in 1996 on eight criminal counts stemming from a Memphis-based cocaine trafficking operation involving more than a dozen people.

Ten of her co-defendants testified against her during her trial in exchange for a reduced or dropped charges. For some reason Johnson was never offered the same plea deal and she was sentenced to life in prison in 1997. 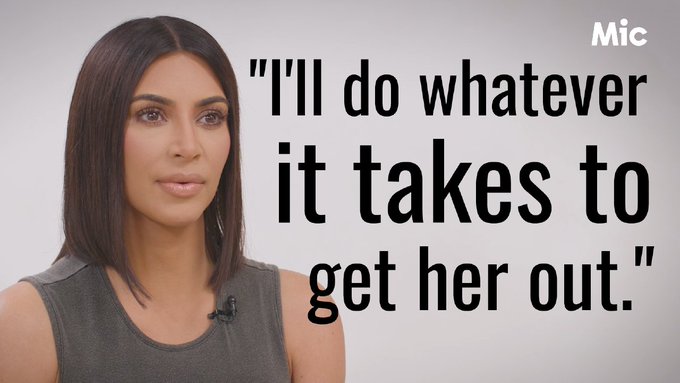 The meeting with Trump, which was initially reported by @VanityFair, marks the culmination of months of @KimKardashian West’s behind-the-scenes efforts to free #AliceMarieJohnson. pic.twitter.com/EyGwQ2vct1http://bit.ly/2xpZ1mT

3. Her children petitioned for her release three times

Johnson’s daughter, Tretessa has become a vocal advocate for her mother over the years, making sure the press and the public know the woman behind the case.

“She’s made some serious mistakes in her life, but she is not this monster,” she said of her mother. “I mean, she’s really turned a very negative situation to as positive of a situation as she can.”

“We are praying for mercy in my mom’s case… that this nightmare is finally coming to an end,” she told  told BBC News in reference to Kardashian’s involvement.

Amy Povah, founder of the organization CAN-DO Clemency, started advocating for Johnson in 2014, and even collected a “letter of support from the retired warden of Johnson’s prison” to corroborate her character as a “model inmate”, which will be given to Trump.

In December 2016 President Obama pardoned 231 individuals. But unfortunately Johnson didn’t “fit all of the criteria” for the former president’s clemency project, and was rejected just days before Obama’s term ended.

A stunned Johnson told Mic, “When the criteria came out for clemency, I thought for sure—in fact, I was certain that I’d met and exceeded all of the criteria.”

Povah told BBC News that Johnson has “always stood out to me as being exceptional. She’s not bitter or angry, she’s this ray of sunshine.”

4. Kardashian hired a new team of lawyers on Johnson’s behalf

In November 2017 Kardashian’s Los Angeles-based attorney, Shawn Holley was brought onto the case.

“Kim asked me several weeks ago how she could help Alice Johnson in her fight for justice,” Holley told New York Daily News. “We then began corresponding with Alice and her team of lawyers.”

Holley is the same high profile attorney whose past clients include Michael Jackson, Lindsay Lohan and O.J. Simpson.

Johnson publicly thanked Kardashian for her ongoing and rigorous support.

“There are no words strong enough to express my deep and heartfelt gratitude. Ms. Kardashian, you are quite literally helping to save my life and restore me to my family. I was drowning and you have thrown me a life jacket, and given me hope that this life jacket I’m serving may one day be taken off.”

Check out her story in her own words here.

Kardashian chose to symbolically make her trip to the White House on Johnson’s birthday.

“Today’s her birthday, so no greater gift than freedom on her birthday,”  Johnson’s lawyer, Brittany Barnett, told The Daily Mail.

The reality star also made the announcement on Twitter just hours before meeting with Trump in Washington.

Happy Birthday Alice Marie Johnson. Today is for you

Before her already infamous pow-wow with the President, Kardashian had already been speaking with Jared Kushner, the president’s senior advisor (and son-in-law), about Johnson’s case for months.

Kushner, whose father was convicted of white collar crimes in 2005, is working on The Prison Reform and Redemption Act which aims to reduce the rate of recidivism, and prepare prisoners to reintegrate into society.

Following the meeting, Trump tweeted a photo with her in the Oval Office.

“Great meeting with @KimKardashiantoday, talked about prison reform and sentencing,” he wrote.