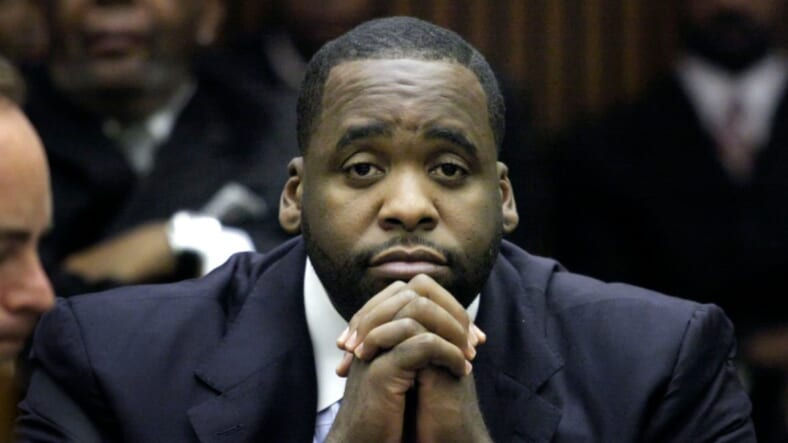 In a lengthy Facebook post, former Detroit mayor Kwame Kilpatrick laid out all the reasons why Donald Trump should commute his 28-year prison sentence.

In 2013, Kilpatrick was sentenced to almost 30-years in federal prison after being convicted of two dozen felonies that included extortion and racketeering. The most salacious part of his trial though was the release of sexually explicit text messages between him and his then-married chief of staff, Christine Beatty. Kilpatrick was also married.

Kilpatrick has been incarcerated for seven years total between his stints in county, state and federal prisons on various charges and now sits in a New Jersey prison. His Facebook post asking for clemency highlights his faith and what he has endured since being imprisoned.

“I accepted Christ as my Lord, my Savior, and my Redeemer that day; June 9, 2014. And everything in my life changed! Not just in my life, but also in the lives of my parents, my siblings and my sons.

“Yes, I have been punished severely. I have been chained like a wild animal, shacked around my ankles, waist and wrist, with a black box to keep my hands at my side many times. I have spent more than 5-Months in Solitary Confinement at different periods in this journey because they wanted to do that to me. I have experienced ridicule, scorn, and disrespect from prison staff that you couldn’t imagine.

He says he’s been taking lots of courses (literally every course he could) and now teaches his own courses in public speaking, employability skills, and Bible study. He is also a worship leader for the prison’s church services.  Basically he’s saying he’s a model prisoner and he’s even copping to his own bad behavior.

“Yes, I have made some very bad decisions in my life. Yes, I betrayed my wife and family because of my own lust and sin. Yes, I failed to deliver on the promises and opportunities that was given to me by the people of Detroit, Michigan. And yes, I have been severely punished for it.”

Ultimately he’s making the claim that  Detroiters, his family, and even Jesus have forgiven him and Trump should too.

“My family has forgiven me. I have asked the people of the city of Detroit for forgiveness many times. And most Detroiters have forgiven me as well…

By God’s grace, I have received a pardon from Him, through Christ Jesus. I pray that I will receive the opportunity for Pardon/Clemency from the President of the United States as well.”

Trump recently commuted the sentence of a Black woman named Alice Marie Johnson who was serving a life-sentence for non-violent drug offenses. He has also granted clemency to his supporters Dinesh D’Souza, Joe Arpaio, and Scooter Libby.

Trump has not yet responded to Kilpatrick’s request.