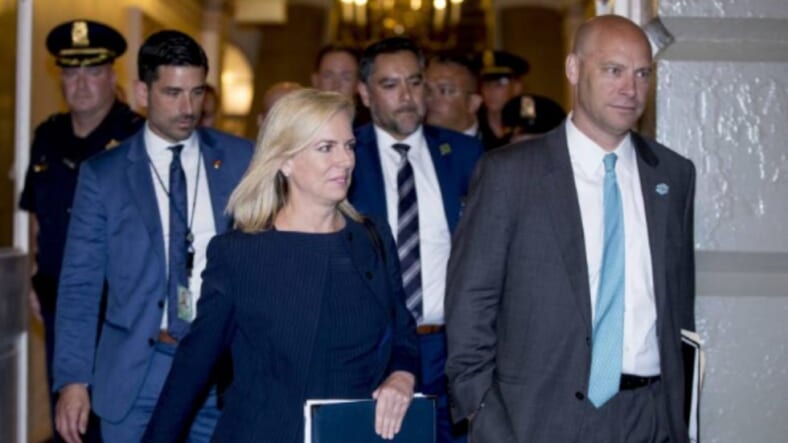 As outrage continues to grow over Trump’s insensitive immigration policy, protesters made it clear that without justice, Kirstjen Nielsen would not be eating in peace, reports the Washington Post.

The controversial Secretary of Homeland Security was heckled by protesters while trying to chow down at a Mexican restaurant, after a long day of defending Trump’s controversial policy of separating migrant families and putting tender babies in cages at the US/Mexican border.

About fifteen protestors chanted “Shame!” and “End family separation!” at MXDC Cocina Mexicana as she sat with one other person.

“How dare you spend your evening here eating dinner as you’re complicit in the separation and deportation of over 10,000 children separated from their parents? How can you enjoy a Mexican dinner as you’re deporting and imprisoning tens of thousands of people who come here seeking asylum in the United States? We call on you to end family separation and abolish ICE!”

“In a Mexican restaurant, of all places!” one said.

“Have you listened to it? Do you hear the babies crying?” a protester yelled, in reference to audio leaked from an immigration facility to ProPublica. You can hear the constant wails from children.

Brent Epperson, at the restaurant at the time of the protest, witnessed the protests.

“A lot of people were very happy to see her shamed,” Epperson told The Post. He said Nielsen and her guest “looked a little disturbed.”

“They tried to pretend like nothing was happening, but it lasted long enough that they couldn’t,” Epperson said. “They were just sitting there like statues, waiting for the protest to end.”