The Duchess of Sussex Meghan Markle, the Duchess of Cambridge Kate Middleton, Tiger Woods, and Lewis Hamilton were front and center amongst the star studded crowd 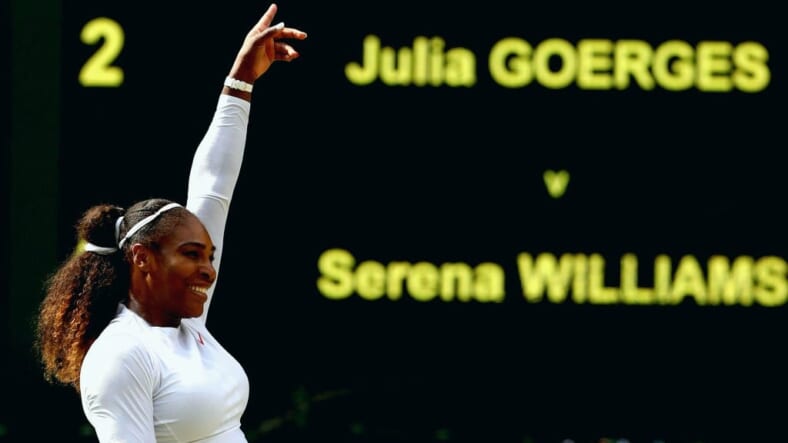 As tennis great Serena Williams took center court today at Wimbledon, it was also somewhat of a star-studded affair as some notable friends were right there cheering her on from the sidelines, reports USA Today.

The Duchess of Sussex Meghan Markle and the Duchess of Cambridge, Kate Middleton, took some time off from their royal duties to attend the tennis tournament in London earlier today and show support for their friend William as she competed for her eighth Wimbledon title.

Woods is known to attend the high stakes tennis matches. And he himself is gearing up for some competitive play next week when the British Open is played at Carnoustie in Scotland.

A star-studded support for @serenawilliams as both @TigerWoods and @LewisHamilton are spotted in her box.#Wimbledon pic.twitter.com/bEIF7sD5wc

Williams is in go-mode after a rocky year of health scares. Last week, she beat Julia Görges 6-2, 6-4 in the Wimbledon semifinals and now stands at one win away from her eighth championship.

“It’s crazy. I don’t even know how to feel, you know, because literally, I didn’t expect to do this well in my fourth tournament back,” Williams said according to ESPN.

Williams is battling it out with 11th-seeded Angelique Kerber.

Williams is gearing up to clinch her 24th grand slam and probably the sweetest victory of all following the birth of her 10-month-old baby girl Alexis Ohanian. Williams had quite a few twists and turns and this proved to be a tough year for the tennis star who seeded 25th in the tournament after her pregnancy hiatus. (Not to mention that she had to fight for that position after she was dropped to 183rd place!)

The tables have now turned in her favor and rightfully so.

“This is not inevitable for me,” Serena Williams said, alluding to the serious postpartum health problems she faced after giving birth.

“I had a really tough delivery and multiple surgeries and almost didn’t make it, to be honest. I couldn’t even walk to my mailbox, so it’s definitely not normal for me to be in a Wimbledon final.”

Williams is proud of her accomplishments and the fight ahead on the court.