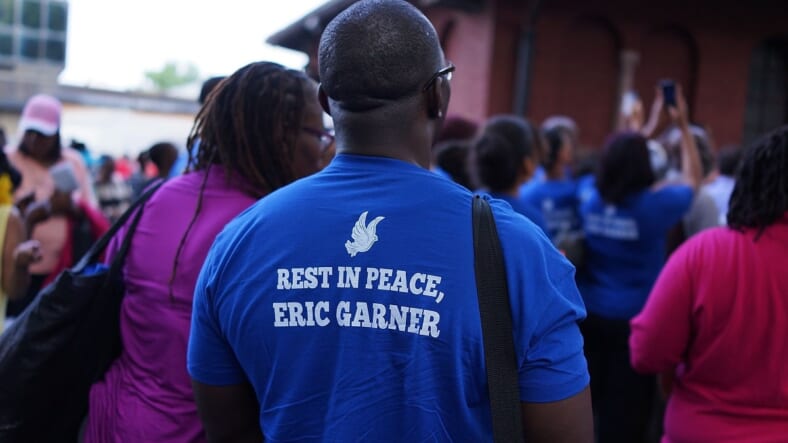 The New York Police Department finally has filed departmental charges against Officer Daniel Pantaleo in the death of Eric Garner four years ago, according to CBS New York.

A police spokesman says disciplinary charges were filed against Pantaleo on Friday just days after the NYPD gave the U.S. Justice Department an ultimatum; if federal investigators don’t take action on the case by the end of August, the police department would.

The Civilian Complaint Review Board, a police watchdog agency, will prosecute Pantaleo.

Garner’s surviving family held a rally outside City Hall last week on the fourth anniversary of his July 17, 2014 death, calling for no further delays in justice.

Garner, who had asthma, is heard in an infamous cellphone video of his arrest gasping, “I can’t breathe” as he was being held down on the ground by NYPD officers. He had been accused of selling loose cigarettes.

He was pronounced dead at a hospital. Garner’s death became a rallying cry in the Black Lives Matter movement.

The medical examiner determined that the death was a homicide caused in part by a chokehold in which Pantaleo held Garner. Despite that, a grand jury declined to indict Pantaleo. The Justice Department launched a civil rights investigation in 2014, yet it has not filed charges in the case.

“Officer Pantaleo is getting away with murder,” Garner’s mother Gwen Carr said to the New York Times in May. “He killed my son and now his life goes on business as usual.

The Police Benevolent Association says it hopes the NYPD’s eagerness doesn’t mean an outcome has already been decided. The PBA says it is confident that Officer Pantaleo, who has been on administrative duty, will be vindicated.