More immigrant parents at risk of being deported without their children 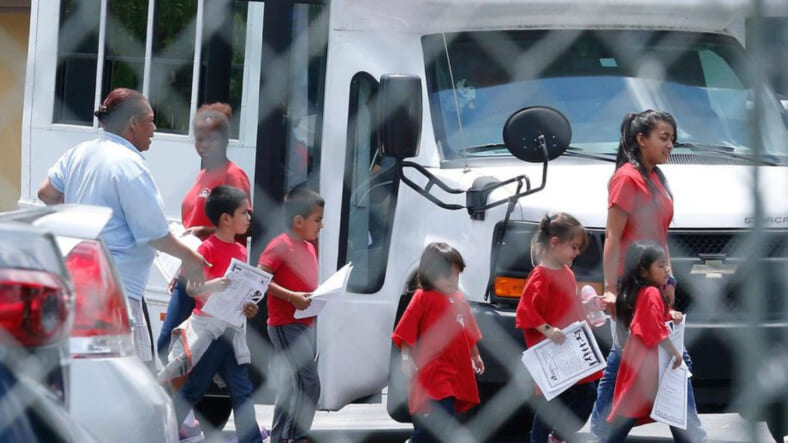 In this June 21, 2018, photo, migrant children walk off a bus at the Catholic Charities' Msgr. Bryan Walsh Children's Village in Cutler Bay, Fla. Congresswoman Debbie Wasserman Schultz said Monday, June 25, that children who range in age from newborns to 5 years old are being sheltered at this facility and His House Children's Home in Miami Gardens. (Photo/Brynn Anderson)

The Trump administration is still scrambling to reunite migrant families as the Thursday deadline looms and so far, they admit a more pressing issue: at least 460 parents may have already been deported without their children, CNN reports.

—Devastated sister of Nia Wilson speaks out about the attack; murderer arrested—

According to the latest status update filed Monday, the court ordered reunification process is proving to be difficult. The 463 parents that cannot be located may have been deported without their child, but the US said that number is till “under review.”

They also contend that many parents agreed to leave their children in the US. But advocates and attorneys argue that deported parents may not have understood what they were being asked to do. Advocates also argue that detained parents were not provided with enough information pertaining their immigrant children’s whereabouts.

In the first government mandated deadline, the US could not reunify 12 parents with their children aged five and older because they had already been deported. The US has had difficulty locating just 12 parents so trying to get a handle on 463 will be a monumental task and the government has yet to specify how they will do it.

So far, a status report says that 879 families have been reunited. There are 538 parents waiting in government custody to be reunited with their children.

There have also been 1,187 children reportedly released to family members or the Department of Health and Human Services released them to a sponsor.

According to CNN, some 1,634 out of 2,551 migrant children are awaiting reunification. There are 194 are either ineligible or declined reunification, and 463 are believed to have been deported and another 260 are under review.

There are at least 900 parents in the US facing a final order of deportation. However, Judge Dana Sabraw has paused all deportation to give parents a chance to review their options.