'QUINCY' will hit the streaming service on September 21. 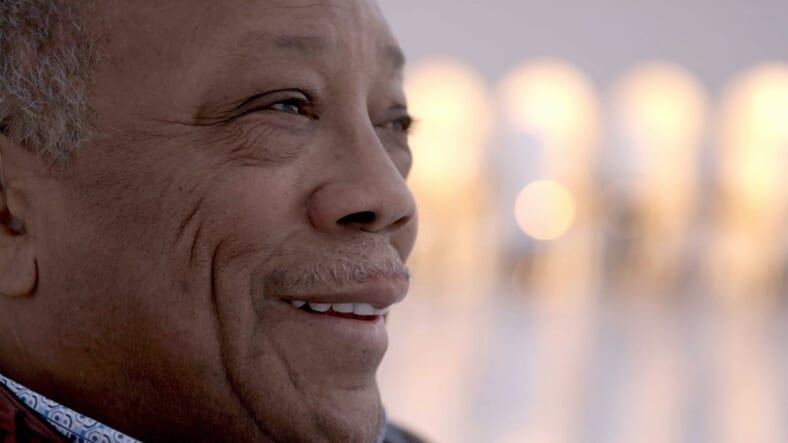 Netflix is gearing up to release QUINCY, an intimate look into the life of iconic music man, Quincy Jones.

The documentary was directed by Jones’ real-life daughter, Rashida Jones, along with Alan Hicks and is executive produced by Jane Rosenthal and Berry Welsh. It’s set to hit the streaming service on September 21 and will have a limited theatrical release as well.

According to the press release:

The film seamlessly threads personal vérité moments with private archival footage to reveal a legendary life like no other.   A unique force in music and popular culture for 70 years, Jones has transcended racial and cultural boundaries; his story is inextricably woven into the fabric of America. Beyond his own acclaim as a trumpeter, producer, conductor, composer and arranger, Jones’s inimitable gift to discover the biggest talents of the past half of the century is unprecedented. He has mentored and cultivated the careers of young talents, from Lesley Gore and Michael Jackson to Oprah Winfrey and Will Smith.

We can’t think of anything sweeter than Jones’ daughter helming the project about her father.

“It’s rare that somebody who has lived as much life as my dad is still interested in growing and knowing the next generation,” says Rashida Jones. “He is such a man of action and accomplishments, but we were so lucky to spend real time with him, to let him reflect on life and the larger picture. I feel honored to be able to share that with audiences all over the world.”

Co-director, Alan Hicks, has plenty of reasons for signing on to the project.

“There is really no one like Quincy, the sheer breadth of his work alone is unparalleled, but the story of him as a man has never been comprehensively told. It was a privilege to have his trust, allowing us to capture intimate moments giving insight into the fabric of the man,” he says.

Quincy Jones’s career as a composer, conductor, best-selling author, multi-media entrepreneur and producer spans decades. He stands today as one of the most successful and admired artists of the entertainment world and was named by TIME as one of the most influential jazz musicians of the 20th century.

Jones is one of only 18 people to join the EGOT club, winning all four major annual American entertainment awards (Emmy, Grammy, Oscar, Tony).  He is the most Grammy-nominated artist of all time, with a total of 79 nominations, and has won 27 times (the second all-time highest number in history.)  As producer and conductor of the historic “We Are The World” recording (best-selling single of all time), and Michael Jackson’s multi-platinum solo albums, “Off The Wall,” “Bad,” and “Thriller” (the best-selling album of all time), Jones stands as one of the most successful and admired creative artists/executives in the history of the entertainment world.