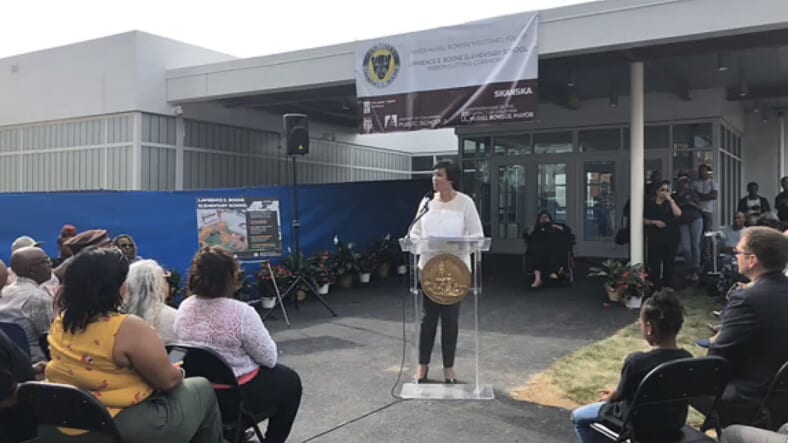 Orr Elementary was once named after a Virginia-born slave owner, but the D.C. school has ditched the name to honor its first black principal.

Since the early 70’s, the institution was named after Washington’s fourth mayor — Benjamin Grayson Orr — known for establishing the volunteer fire department, as well as creating a lottery to help pay for a jail and city hall, WAMU reported.

But when the young students who attend his namesake elementary school discovered he was also a slaveholder, it sparked a years-long campaign to rename the institution.

“It was kind of a shocker. It was kind of heavy,” recalls Kelly Jones, a special education teacher at Orr. Nearly all of the 400 enrolled students are black.

“As students and as faculty and as people involved in the school, we were like, ‘Well, as a predominantly black school, could we have that name represent us, our student body?’ And the students were just like, ‘No, that’s not right,’” Jones added.

The community effort paid off, as the doors to the newly named school opened this week and students returned to a fully modernized building named after Lawrence E. Boone, the school’s first Black principal, who served from 1970 until 1995.

“He was family. You never really thought you were actually coming to school. You thought you were going to a grandparents’ house. That’s pretty much how he made you feel,” says Eric Hodges, Jr., who attended Orr in the early 1990s.

The school’s name change comes as cities across the country, largely in the south, continue to face criticism from people opposed to public building names, statues, and memorials that are linked to Confederate leaders.

Former D.C. school teacher Littyce Boone, Lawrence Boone’s only child, said he was passionate not only about what went on inside the halls of the schoolhouse – but also outside of it.

“He became the community father,” she says. “You can go outside right now and ask anyone across the street that’s sitting there and ask them, ‘What about Mr. Boone?’ And they will give you a whole story about how Mr. Boone helped them.”

Boone died of cancer five years ago and noted recounted in his memoir his time at Orr: “I knew that this was God’s plan for me. I felt that I belonged in this environment. I loved the children and the community.”

He was such an inspiration to the community that after he died, two funeral services had to be held in order to accommodate all the people who wanted to pay their respects.