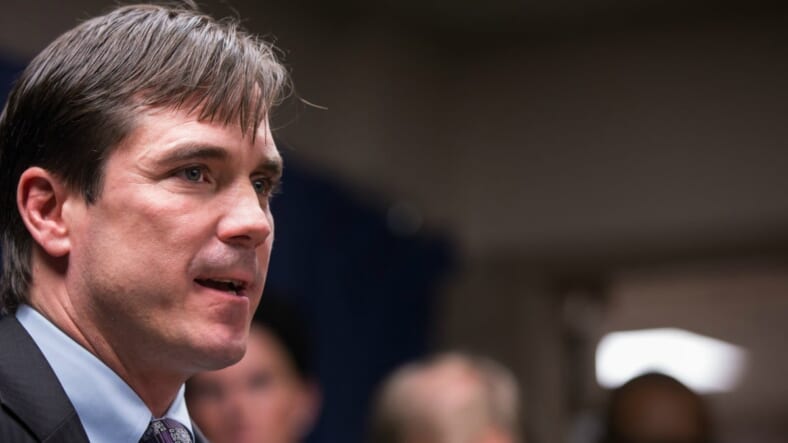 : Nick Lyon, Director of Michigan Department of Health and Human Services, speaks to the media regarding the Flint water crisis. Brett Carlsen/Getty Images

The chief health official in Michigan has been ordered to stand trial on involuntary manslaughter charges for deaths in connection to the Flint Water Crisis in one of the most watched cases linked to the ordeal in its four-year history.

According to multiple reports, about 90 people developed illness related to the city’s tainted water, and 12 have died.

Judge David Goggins ruled on Monday that Nick Lyon, director of Michigan’s Department of Health and Human Services, was “corrupt” in his handling of the Flint’s 2014-15 Legionnaires’ disease outbreak and will stand trial on felony charges including involuntary manslaughter, The Detroit News reported.

Michigan’s Attorney General Bill Schutte’s office investigated how the city’s water system had become contaminated once the city used water from the Flint River over a period of 18 months. The Lyon case comes as a result of Schuette bringing prosecutions.

Lyon appeared to be surprised by the ruling as he shook his head in disappointment while the judge made it clear that he would be heading to trial.

“I do find based upon the totality of all the evidence … I find this behavior over this time period of withholding information corrupt based upon misconduct in office for probable cause standards,” said Goggins.

The judge also decided Lyon “willfully and neglectfully refused” to protect the lives of two local men who reportedly died from Legionnaires’ by failing to “act to appropriately with regard disseminating notices to the public.”

Lyon is set to go to trial on two counts of involuntary manslaughter and one count of misconduct in office, according to U.S. News and World Report. More than half of the people affected by the disease shared one thing in common, they spent time at McLaren Flint Hospital, which was found to be the singular source of exposure of Legionella bacteria by state officials.

The outlet also noted that Lyon “had the ability” to know how many deaths were related to the disease and the “power” to protect lives and “enforce laws” to that end, the judge ruled.

Lyon, meanwhile, denies wrongdoing and his attorneys said there is not enough solid information to determine the exact cause of Legionnaires’. Defense attorney John Bursch called the judge’s decision “mystifying.

“Normally we don’t see government officials accused of manslaughter based on what they didn’t do,” Peter Henning, a professor at Wayne State University law school in Detroit, told U.S. News. “That does make it an unusual case, and it will make government officials be much more cautious. Maybe that’s the message here.”

But others agree that sending a senior official to trial over the Flint Water Crisis is  “long overdue.”

“He withheld the truth. There’s no excuse,” said courtroom spectator, Karina Petri, 30, of Milwaukee, who wore a “Flint Lives Matter” shirt. “He could have changed hundreds of lives.”