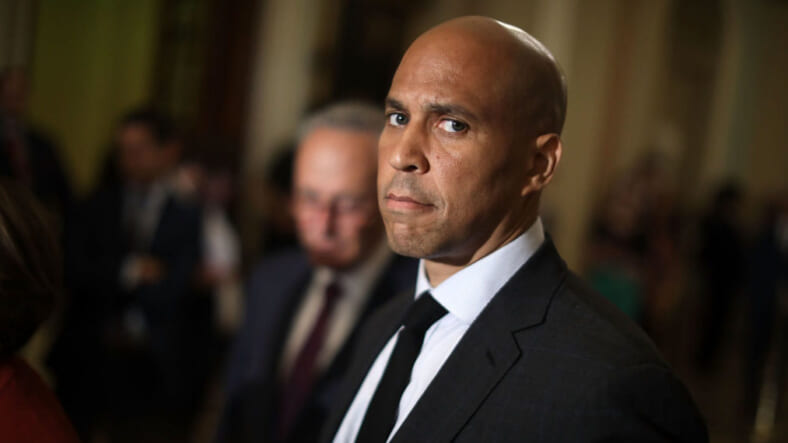 Sen. Cory Booker, in a volatile exchange during the Senate committee hearing for Supreme Court nominee Brett Kavanaugh, released confidential presidential documents on Tuesday, violating a confidentiality rule and now could be in trouble with his Congressional colleagues.

Booker said in the hearing that his attempts to question Kavanaugh on race were being thwarted by Republicans. He questioned the U.S. Circuit Court judge about an email sent when he was a lawyer for President George W. Bush. The email, Booker believes, shows that Kavanaugh was open to police doing racial profiling.

READ MORE: Maxine Waters: ‘Trump is coming for me’

The New Jersey politician threatened to release the email, even if it means expulsion from the Senate.

“This is about the closest I’ll ever come in my life to an ‘I am Spartacus’ moment,” he said during the procedure.

The Senate debated for at least 30 minutes on the rule for use of “committee confidential” documents and whether or not the rule applied to the Senate Judiciary Committee, which is responsible for approving Kavanaugh as a Supreme Court justice.

Booker aligned with other Senate Democrats last month in demanding a release of 141,000 documents that had been marked committee confidential, his office said in a statement. The documents he released contain emails regarding Kavanaugh’s views on racial profiling and affirmative action, on which Booker questioned him Wednesday night.

“As I’ve been saying from the beginning, this process has been a sham,” Booker said. “The fact that tens of thousands of documents revealing a Supreme Court nominee’s views on key issues were deemed Committee Confidential and not available to the public reflects the absurdity of this process.

“The public has a right to access documents about a Supreme Court nominee’s views on issues that are profoundly important, such as race and the law,” he continued. “This process has demonstrated an unprecedented level of secrecy and opaqueness that undermines the Senate’s Constitutional duty to advice and consent.”

Texas Sen. John Cornryn warned that if Booker released the documents that it would be essentially releasing classified information. However, Booker argued that the documents should not be held as confidential because they did not deal with national security.

No word yet on if the Senate will move to censure or expel Booker.

Read all of the documents Booker released here.