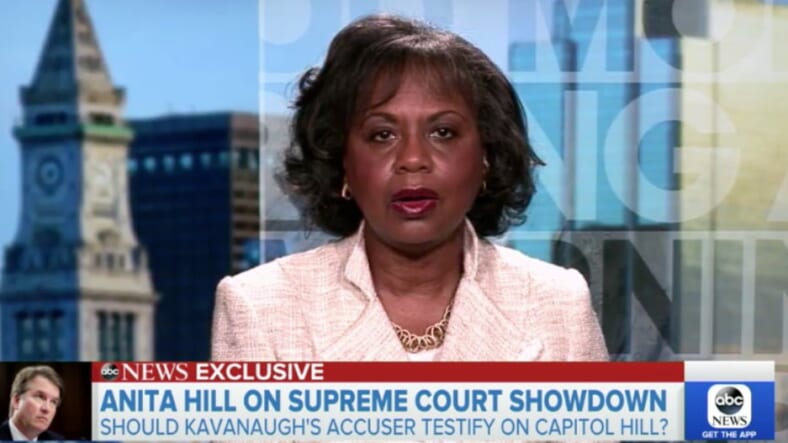 As Republicans try to push Supreme Court nominee Brett Kavanaugh’s confirmation through at a record pace, Anita Hill says she wants the Senate to give his rape accuser more consideration than they gave her.

Judge Kavanaugh’s confirmation for the Supreme Court has taken an uncertain turn as Republican senators express concern over a woman’s allegation that a drunken Kavanaugh attacked Christine Blasey Ford at a party 37 years ago when they were teenagers.

Like Ford, who is receiving death threats for speaking out, Hill went through her own personal hell back in 1991 when she testified against Clarence Thomas and accused him of sexual misconduct.

“He spoke about … such matters as women having sex with animals and films showing group sex or rape scenes,” she said during the televised hearings after President George H.W. Bush nominated Thomas to succeed Thurgood Marshall on the Supreme Court.

Thomas was confirmed. Hill believes she got a raw deal.

“Today, the public expects better from our government than we got in 1991, when our representatives performed in ways that gave employers permission to mishandle workplace harassment complaints throughout the following decades. That the Senate Judiciary Committee still lacks a protocol for vetting sexual harassment and assault claims that surface during a confirmation hearing suggests that the committee has learned little from the Thomas hearing, much less the more recent #MeToo movement,” Hill wrote for the New York Times.

“With the current heightened awareness of sexual violence comes heightened accountability for our representatives. To do better, the 2018 Senate Judiciary Committee must demonstrate a clear understanding that sexual violence is a social reality to which elected representatives must respond. A fair, neutral and well-thought-out course is the only way to approach Dr. Blasey and Judge Kavanaugh’s forthcoming testimony. The details of what that process would look like should be guided by experts who have devoted their careers to understanding sexual violence. The job of the Senate Judiciary Committee is to serve as fact-finders, to better serve the American public, and the weight of the government should not be used to destroy the lives of witnesses who are called to testify.”

FULL INTERVIEW: Anita Hill, who accused then-SCOTUS nominee Clarence Thomas of sexual harassment in 1991, tells @GStephanopoulos that Brett Kavanaugh has the ‘burden of persuasion’ when it comes to these sexual assault allegations. https://t.co/JAIFqxoc0e pic.twitter.com/Th687r6BT7

Ford, now a research psychologist in Northern California, has outlined a violent account of her interaction with Kavanaugh.

She told the Washington Post Sunday that when she was 15, Kavanaugh, then 17, attacked her. He tried to pull off her clothes and a one-piece bathing suit, groped her body—all while holding his hand over her mouth so she couldn’t scream.

Ford said Kavanaugh’s friend, Mark Judge, tried to jump on them and because of that she was able to escape.

Kavanaugh has denied her accusations.

“I categorically and unequivocally deny this allegation,” he said in a statement distributed by the White House. “I did not do this back in high school or at any time.”

“With years of hindsight, mounds of evidence of the prevalence and harm that sexual violence causes individuals and our institutions, as well as a Senate with more women than ever, ‘not getting it’ isn’t an option for our elected representatives. In 2018, our senators must get it right.”

Ford’s revelation has so far derailed the confirmation vote, initially scheduled for Thursday. It was postponed until Monday.

Ford has called for an FBI investigation before she testifies. According to New York Times, Christine Blasey Ford said through her lawyers that she would cooperate with the Senate Judiciary Committee and left open the possibility of testifying later about her allegations against Kavanaugh. But echoing Senate Democrats, she said an investigation should be “the first step” before she is put “on national television to relive this traumatic and harrowing incident.”