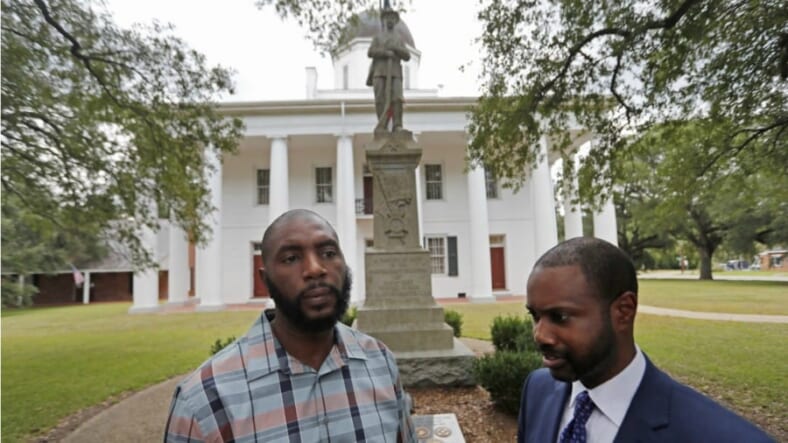 FILE – In a Wednesday, Aug. 1, 2018 file photo, Ronnie Anderson, left, an African-American man charged with possession of a firearm by a convicted felon, stands with his lawyer Niles Haymer in front of a confederate statue on the lawn of the East Feliciana Parish Courthouse, where he is facing the charge, in Clinton, La. (AP Photo/Gerald Herbert, File)

NEW ORLEANS (AP) — A legal argument has been revived in Louisiana over whether a black defendant can get a fair trial in a courthouse where a Confederate monument is displayed.

Niles Haymer, a lawyer for defendant Ronnie Anderson, says the answer is no. He released copies Tuesday of his new motion to have Anderson’s case moved out of state court in the city of Clinton, where a Confederate monument stands outside the East Feliciana Parish Courthouse.

A judge rejected a similar motion in August, saying Haymer filed too late.

That gives Haymer an opportunity to renew his argument that the 30-foot-high (9-meter-high) monument — a soldier on a pedestal erected in 1909 during the Jim Crow era — signals that a black defendant cannot get a fair trial in East Feliciana Parish, which is about 30 miles (48 kilometers) north of Baton Rouge.

“Defendant contends that this Confederate Monument is not just memorializing the Confederacy but revering the Confederacy and what it stood for, right in front of the very place that African Americans go to seek fairness and impartiality in the court system,” his motion reads.