Kanye’s antics didn’t end at the White House, just ask the people at the Apple store

After his photo-op and lunch with President Trump, Ye found another place to continue his ravings, which people are finding hard to understand 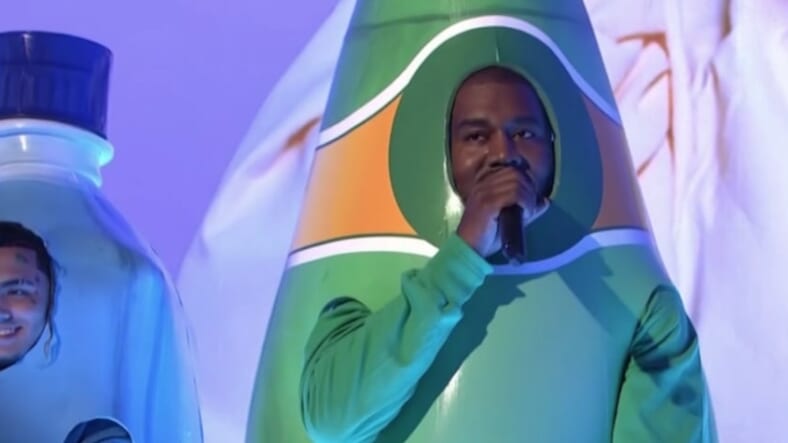 After his erratic rant at the White House during a meeting with President Trump, Kanye West, in search of another captive audience, stood on a table inside a Washington D.C. Apple store and gave an impromptu speech no one asked for.

Jack Jenkins, a reporter for Religion News Service, who happened to be inside the store, captured West’s rant and livestreamed it on Twitter. West bragged about creating a MAGA hat for Trump without the “again” at the end and claimed he explained to Trump that the word was offensive to Black folks.

He just asked to give a “keynote” on top a table.

He’s announcing he made a hat for Trump that says “made an updated hat that says ‘make America great’ without the ‘again’…and Trump wore it!”

Shows a picture on his iphone of Trump wearing said hat.

Says the “again” part of the original slogan “hurts back people.” pic.twitter.com/mt2vO3Sl86

In a wide-ranging oval office rant Ye sat down with Trump and swung from lamenting not having a lot of male influence in his life due to his parents’ divorce, how welfare keeps black folks from working, how he dreams of Trump and Kaepernick meeting at the Super Bowl both wearing MAGA hats, and endless praise for the president.

The main point of the conversation was supposed to be prison reform, American manufacturing, creating jobs and preventing gang violence in Chicago.

But it didn’t quite go that way.

It’s no surprise this meeting happened given that West went off the rails after a Saturday Night Live meltdown.

Ye helped kick off the 44th season premiere of the sketch comedy series, and as TheGrio previously reported, fans didn’t know what to make of their “idol dancing around dressed as a water bottle” during his “I Love It” collab with Lil Pump for the first musical performance of the night.

There’s reportedly infighting at the Kardashian camp, and he’s deleted all his social media after yet another idiotic rant about slavery.

And while he’s rocking the MAGA hat and stumping for Trump, Taylor Swift of all people has stepped up to throw her support behind two Democratic Senate contenders.