Cory Booker gets a warm welcome from South Carolina Democrats 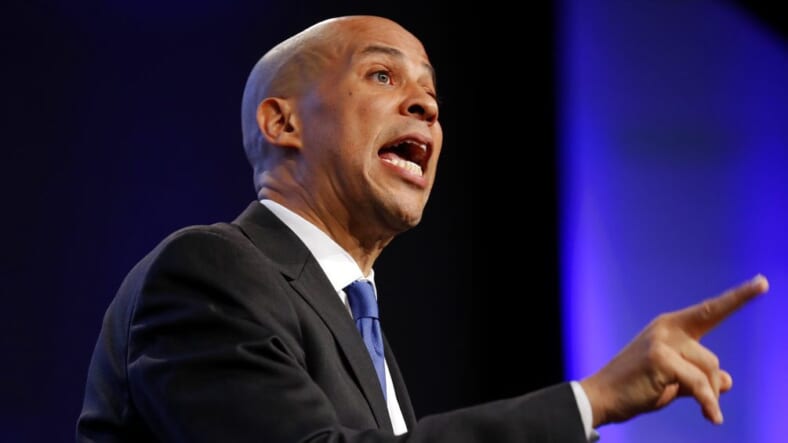 By BILL BARROW, Associated Press
ORANGEBURG, S.C. (AP) — Cory Booker had hundreds of Democratic activists nodding, applauding and eventually roaring — complete with a sermon-style call-and-response — as he entertained the Orangeburg County party barbecue to put the exclamation point on his first day in South Carolina as a potential presidential contender.

The New Jersey senator’s two-day swing to the South’s first primary state is ostensibly about the upcoming midterm elections. But Booker’s visit — like California Sen. Kamala Harris’s trip to follow on Friday — is heavy with the overtones of a looming Democratic free-for-all as the party looks for a leader to take on President Donald Trump in 2020.

“Excellent job, hit all the points: health care, prejudice, young people killing each other, all of it,” said Nathaniel McFadden, 59, after Booker’s spent 15 minutes on stage at the Orangeburg County Democratic Party’s annual gala.

Johnny Spells, a 60-year-old local businessman, went higher with his praise. “He reminds me of a young Barack Obama. And write this down: He’s the next president of the United States.”

There’s a long way to go before Spells can know whether he’s prescient or just smitten. Booker said himself he won’t decide his next move until after the Nov. 6 midterms.

But whether Democrats nominate Booker or someone else, South Carolina will be key. It’s the first state, and the only one of the first four to cast primary or caucus ballots, to feature a significant number of black voters. South Carolina went heavily for Obama in 2008 and for Hillary Clinton in 2016, previewing Southern sweeps that propelled each to the nomination.

“We know how important we have become,” said state Rep. Jerry Govan, a local representative and incoming chairman of the state’s legislative Black Caucus.
Govan said the influence gives South Carolina Democrats the freedom to be choosy. “We’re doing the senator a favor here,” Govan said, pointing out the nearly 1,000 party activists gathered in Orangeburg.

Booker seemed to know as much Thursday, taking every opportunity to connect his experience with the voters in front of him.

“I was raised in the black church,” he told overwhelmingly black audiences in Orangeburg and at previous stops — one across town at South Carolina State University, another at Columbia’s Allen University. Both are historically black schools.

As he often does, he freely quoted African-American luminaries from Martin Luther King Jr. to poet Maya Angelou and writer Langston Hughes.

He recounted being mayor of Newark, New Jersey, “a majority black city,” and noted he’s “the only senator in Washington, D.C., who still lives in a majority black neighborhood.” Booker is one of three black senators. The other two: Harris, who will appear Friday in South Carolina, and Tim Scott of South Carolina.

Booker, 49, also leaned heavily on his lineage, mentioning grandparents from Louisiana and Alabama. At the barbecue, he recalled his father humorously. The man wasn’t just poor as a child, Booker explained. He was “po’ — p.o. … couldn’t afford the other two letters.” Another Booker household mantra: “Boy, don’t walk around here like you hit a triple. You were born on third base.”

Margaret Frazier, sat in the front row, steps from the flatbed where Booker held court. “That’s just what we need to take out the president,” she said afterward, arguing that Booker can mix aggressiveness with charm.

Speaking earlier to students, Booker detailed how his father became the first man in his family to break from generations of poverty that stretched back to slavery. He wove that story into a litany of national blights, from the wealth gap between whites and black and escalating college costs for everyone to mass incarcerations and the infant mortality rate.
“If America hasn’t broken your heart, you don’t love her enough,” he said in Columbia, painting a dire-yet-hopeful image of a country still trying to reach its potential.

He didn’t necessarily place blame where his partisan audience might expect. “Republicans didn’t do this to us; we did it to ourselves,” by not voting in strong enough numbers.

Randall Washington, a 20-year-old student in Orangeburg who asked Booker about barriers facing young black children, stopped short of saying he’d back Booker for president but said he was struck by Booker’s outlook: “It’s important to me to have someone who understands our experience, and he’s lived it.”

Not every Democrat who heard Booker on Thursday is ready to jump on board.

Govan, who initially backed Biden in 2008 before he joined Obama’s ticket, said Booker’s ability to fire up the base is obvious.

“But I’m not sure we can base this party in the Northeast and on the West Coast and win,” he said. “We’ve got to win in places like the South, and that takes more than black and brown and liberal.”
___
Follow Barrow on Twitter at https://twitter.com/BillBarrowAP.